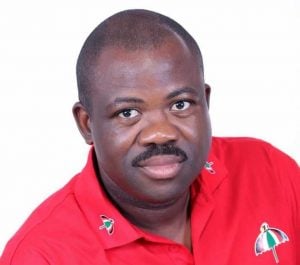 The newly-elected National Organiser for the National Democratic Congress (NDC), Joshua Akamaba, says President Akufo-Addo has not shown enough respect to Kyeremateng Agyarko by going on with his tour.

He has described a visit by the president to the late Member of Parliament’s house as falling short of the honour he deserves.

“The visit of the President to the late Agyarko’s family house was not enough respect. I was expecting the president to cut short his tour and hold a solemn moment for the late Agyarko if he truly believes the NPP has lost a hero.”

Mr Akamba who was speaking on Asempa FM’s Ekosii Sen Thursday said the late Agyarko was a great son of Ghana and should have been mourned in a more appropriate way.

According to Comrade Akamba, the president’s decision to snub the death of the late Agyarko and go ahead with his Eastern Regional tour speaks volumes.

“The president is more interested in Students waving at him while he smiles back instead of treating the dead with respect. I can boldly say NDC is even mourning Agyarko better than the NPP; most people had to boycott meetings for the sake of his death,” he said.

Mr Agyarko, 60, died on Wednesday, November 21 in the United States of America while receiving treatment for an undisclosed ailment.

As a member of the governing New Patriotic Party (NPP), Mr Agarko has been the MP for the Ayawaso West Wuogon Constituency since 2012, after he replaced the current Chief of Staff, Frema Opare as MP for the area.