The two partners, Ghanaian Charles Opoku Darko and Nigerian Adetunji Olorunfemi Adewoye negotiated with real estate developers Codco Limited. While Charles Opoku Darko is supposed to be highly connected to powers in the government in Ghana, Adetunji Olorunfemi Adewoye who managed to get a Ghanaian passport prides himself as son of the Asantehene Osei Tutu to defraud his victims.

Documents have started emerging which point to the fact that the duo with the company, Just Gold Limited, were indeed in touch with Economic and Organised Crimes Office (EOCO) towards the lifting of embargo on the cash transfer which came from Horizon in Dubai. It was reported some US$50million was paid by Horizon for Nana Appiah Mensah, Charles Opoku Darko and Adetunji Olorunfemi Adewoye to supply gold equivalent.

It is emerging that Darko and Adetunji played a fast one on Nana Appiah Mensah when only the two of them rushed to Ghana, managed their way out to get the cash and dashed away.

Darko and Adetunji are said to be in hiding. Nana Appiah Mensah was unfortunate to be grabbed by Horizon but it seems things are working in his favour following the disclosure of the facts and truths.

Journalist Kevin Ekow Taylor has vowed through his “With All Due Respect” series to expose how the government wanted to jail Nana Appiah Mensah in order to let the criminals who received the Dubai cash run away. In part two of his expose, he disclosed that vociferous lawyer Ace Ankomah, was deeply involved in helping Darko and Adetunji get EOCO to defreeze the account.

Ace Ankomah was so distraught and struggled to clear his name but a lot of traces are left in this debacle. He has also consequently deactivated his account on Facebook as the avalanche of trolls overwhelmed him.

Kevin Taylor is set to release part three and high powers in the Akufo-Addo government will be exposed, Ghanacrusader was told.

Check out the documents involved in the purchase of the houses by Darko and Adetunji below;

Fri Jul 26 , 2019
Kwasi Alfred Addo Kwarteng, a British Conservative Party politician with Ghanaian roots, was promoted Thursday by the new UK Prime Minister, Boris Johnson. Mr Kwarteng has served as MP since 2010 for Spelthorne, Surrey, south-east England. On November 16, 2018, he was appointed Undersecretary of State in the Department for […] 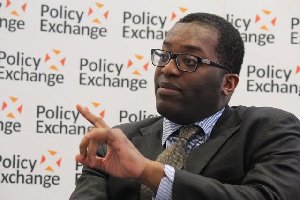