Former President John Mahama has extoled the competence and delivery of former women appointees of his erstwhile government comparing them to the ‘super-incompetent’ women NPP and Akufo-Addo has appointed.

MyNewsGH.com covered Mr Mahama on the trail during his tour of Accra where he had droves of people and chiefs welcome him to their areas. He called out the current Fisheries Minister for incompetence as he revealed fisher folks in the Central Region were begging him to bring back Madam Sherry Ayittey because since she left the ministry, Pre-Mix Fuel has been a headache for them.

“When were in government the last time we promised at least 30% women representation in government, we achieved it we did 33% and some of our hardest working ministers were women. Remember Sherry Ayittey at Fisheries Ministry, very brilliant minister. After she left she left the fishermen are all crying.” Mr Mahama said.

Mr. Mahama promised to increase the number of women if he gets the chance again, saying women must do well when we are all doing well.

“So the women are doing as well as we are doing…so when we win we are going to increase the number of women because we must go along with our women. Any society that has its women lagging behind will not make some progress. There is a place for women alongside with us in the new NDC government.” He continued.

“The last time I went to Central Region one of the fishing communities…oh President Mahama where is Aunty Sherry? We miss her, we don’t get premix.” Mahama revealed. This comes after it was alleged that the Fisheries Minister had awarded a Premix fuel supply monopoly contract to her brother, one Botwe, who was finding it difficult to meet supply.

Wed Oct 31 , 2018
FIFA has issued a life ban and a fine of CHF 500,000 to the former Ghana Football Association (GFA) president Mr Kwasi Nyantakyi foiling him from all football-related activities at both National and International level. The former GFA president was found guilty of “having violated FIFA art.19 (conflicts of […] 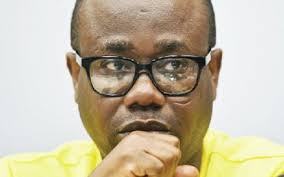