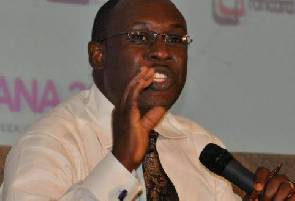 Vice President of policy think tank, Imani Ghana has laid into Ghanaian Members of Parliament, saying “most of them can’t sufficiently express themselves in English”.Kofi Bentil is of the opinion that the benchmarks in the selection of MPs in the country are mediocre, thus, allow every Tom, Dig and Harry to aspire to become a legislator. “I am not saying one has to be expressive in the Queen’s language before contesting as an MP, but it is also baffling that an individual contesting as an MP can’t satisfactorily express his or herself in English.“So whoever says the language is not important is deceiving you, because whether you like it or not, our laws are written in English and one has to master it before considering to become a lawmaker,” the legal practitioner submitted on GHOne Television on Friday.Kofi Bentil said the awful procedure in the selection of MPs has affected the “quality of debate” and thorough scrutiny of loans and bills.“Now parliament pass bills and loans and most of them are riddled with unpardonable errors. You find simple, simple grammatical mistakes,” he asserted. Against that background, Mr Bentil urged the House and the political parties to revise the criteria used in the selection of MPs before matters get worse.