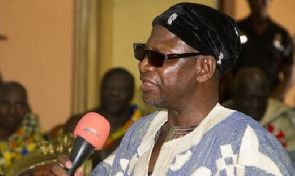 The Member of Parliament (MP) for Nadowli Kaleo, Alban Kingsford Sumana Bagbin appears to have been nursing bitterness in him over certain decisions taken by former President John Dramani Mahama which is why the National Democratic Congress (NDC) lost to the New Patriotic Party (NPP) during the December 2016 elections.

He singled out the appointment of Dr Henry Siedu Daanaa as Minister for Chieftaincy and Traditional Affairs as one of the factors that cost the party at the polls because he is visually impaired.

“There were some of these mistakes that cost us dearly. Let me cite another example, in our tradition if you are not whole can you be a chief or grandmother? So if you form a government and make the minister of Chieftaincy a blind person and the chiefs are objecting and you don’t change him what are you telling the chiefs”, he asked party communicators during his tour of the Volta Region to solicit the support of delegates.

According to him, he has been bastardized for stating the obvious because he was privy to information that all was not right for the party with certain appointments.

“These are facts I am stating I have not added anything. You all know it but you may not have appreciated the impact on what happened. When some of us who are close and we can foresee it and say it, then you are somewhere and you calling to insult us. Then we all are now in an accident. We were in power and we lost with almost one million”, he stated.

Wed Aug 22 , 2018
Residents of Antiwaaso in the Amansie Central District of the Ashanti Region are licking their wounds over the social effects of Chinese illegal miners’ presence in their locality. Some residents who spoke to Adom News said not only are the mining activities of the Chinese affecting their water bodies and […]