One of the pastors who over the years has been predicting what is to happen during election periods is the founder and leader of Glorious Word Power Ministry International, Rev. Isaac Owusu Bempah, who has reiterated his 2016 prophecy that John Dramani Mahama cannot win the 2020 elections just because his hands are still soiled with blood.

According to the pastor, his prophecies do not explain that he has some hatred for the opposition National Democratic Congress (NDC) and its flagbearer John Dramani Mahama but that he speaks under the direction of the Holy Spirit.

He stated categorically that the former President who is seeking re-election after his defeat in the 2016 general elections will lose again just because his hands are not clean.

“I am not insulting him [Mahama] but I know that he has soiled his hands with blood, therefore, I said he will lose the 2016 elections and he lost. I am repeating it again that his [Mahama] hands are soiled with blood, therefore, he will still lose the 2020 elections,” the controversial prophet stated in his church on Sunday, December 8, 2019, amidst cheers from his congregation.

Rev Owusu Bempah was giving further insight to some prophecies he made within the week that an ex-president had planned in killing some personalities in the country for his re-election in the 2020 polls.

He said that ex-President in question fears his ambition will not be accomplished if certain notable persons, including him [Owusu Bempah] are not eliminated.

“I know with this prophecy, some people who do not have spiritual understanding will lambast me but God says I should say it. And so far, as it’s God who has instructed me to declare this prophecy, whoever insults me is cursed,” he warned.

“May these people be careful: Chairman Wontumi [Ashanti Regional Chairman of the NPP], Kennedy Agyapong [Assin Central MP], Abronye DC [Bono Ahafo Regional Chairman of the NPP], Ernest Owusu Bempah [Director of Communications for Ghana Gas Company Limited], and Apostle Dr. Isaac Owusu Bempah. Somebody is working against these people physically and spiritually to take their lives but it will never work,” he added.

Prophecies for 2020 seems to have come earlier than expected because most of these pastors normally predict what is to happen in the coming year during their 31st watch night service.

We are not feeling the $1 million, one constituency policy – Kennedy Agyapong laments

Mon Dec 9 , 2019
New Patriotic Party(NPP) Member of Parliament for Assin Central Kennedy Agyapong has criticised how government policy of $1 million, 1 constituency is being implemented alleging that party members are angry about it and its impact is not being felt. The NPP had campaigned that when voted into power, it would […] 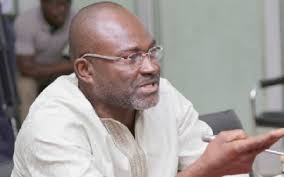