This follows an alleged assault on journalist Caleb Kudah

Col. Agyeman is to report to the Chief of Defence Staff for further investigation and appropriate action

Three other police officers involved have also been withdrawn from the National Security Secretariat.

“The committee also established that the journalist’s unauthorized entry into the premises of the Ministry of National Security was unlawful,” the statement read further.

The Ministry based on the recommendations by the committee took the following action:

“The secondment of Lieutenant Colonel Frank Agyeman, Director of Operations at the Ministry has been reversed. The officer is to report to the Chief of Defence Staff for further investigation and appropriate action.

“The three police officers involved have been withdrawn and are to report to Ghana Police Service for investigation and disciplinary action.”

Journalist Caleb Kudah was arrested for filming some abandoned MASLOC cars parked within the premises of the National Security Ministry.

His colleague Zoe Abu-Baidoo, was also picked up later at the premises of Citi FM/Citi TV in a raid for receiving some files from Caleb Kudah.

Following his release, Caleb Kudah has been recounting harrowing experiences during his time with the National Security operatives.

Kudah said he was slapped several times and physically assaulted by the security operatives.

He said one of the security operatives even kicked him in his groin.

Speaking on Citi TV’s current affairs programme The Point of View, Samuel Attah-Mensah, the Managing Director of the station said the Director of Operations and the operatives who molested Kudah must be sanctioned to deter others.

“They have to take action against Colonel Agyeman because he is a disgrace to the government, he is a disgrace to the National Security, and he is not fit for that job. For this person to treat this young man (Caleb Kudah) like this because he has done something you (Col. Agyeman) consider inappropriate? This is why we fought for this democracy. Take him [Kudah] to court [if he has done something wrong]. This is what we are saying. Process him for court, this is what we call due process.”

“If he did anything wrong he is wrong and wrong is wrong. So you process him for court and let the due process of the law take its rule. When the likes of Nana Akufo-Addo in the 70s and 80s were fighting for this democracy, where were you? You come and turn everything upside down in the name of primitive National Security,” he recounted.

Read below the full statement.

Fri May 21 , 2021
• Vice President Dr Mahamudu Bawumia on Thursday, May 20, 2021, commissioned a new factory under the government’s 1D1F initiative • Nano Foods as the factory is called is the revival of Astek Pineapple factory, an Nsawam-based company that went defunct 21 years ago • Bawumia touted the government’s industrialization […] 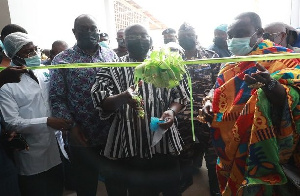