An outspoken member of the opposition National Democratic Congress (NDC), Yayra Koku has claimed the decision by the government to lift the partial lockdown is contrary to the norm.

Three weeks ago, the President, Nana Addo Dankwa Akufo-Addo partially locked down Greater Accra, Kasoa, Tema and Greater Kumasi as part of measures to curb the spread of the coronavirus pandemic.

But addressing the nation Sunday evening, Mr Akufo-Addo said the restrictions of movement in the affected areas have been lifted. He indicated the directives takes effect from 1am Monday, April 20, 2020.

Despite lifting the lock-down for commercial activities to begin from Monday, schools and other public institutions will remain under lock-down for the foreseeable future.

The ban on social and religious gatherings will remain in force while the government seek to navigate the country out of the difficulties brought by the three-week lock-down.

Th country’s borders remain closed for the next two weeks while a strict adherence to social distancing protocol, remain in place.

Reacting, however, to the President’s address, the NDC activist said he was fully convinced that Nana Akufo-Addo lifted the lockdown just so the Electoral Commission (EC) and the National Identification Authority (NIA) could go-ahead to carry out their planned activities.

“I have no doubt in my mind that he has lifted the lockdown to pave way for the EC & NIA to carry out their planned activities and also allow the NPP to do their presidential and parliamentary election”, he wrote on Facebook.

The post added: “Akufo-Addo is thinking about the next election not your health”.

Meanwhile, the country’s COVID-19 case count has increased to 1,042 according to the President.

Mon Apr 20 , 2020
Authorities of the Kumasi Metropolitan Assembly have ordered the closure of the Kumasi Central market hours after President Akufo-Addo ordered the opening of the lockdown areas. According to Ultimate FM’s Isaac Bediako Justice, the closure was necessitated by the refusal of the traders to observe social distancing protocols. ” There […] 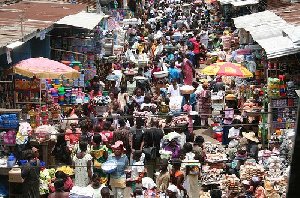