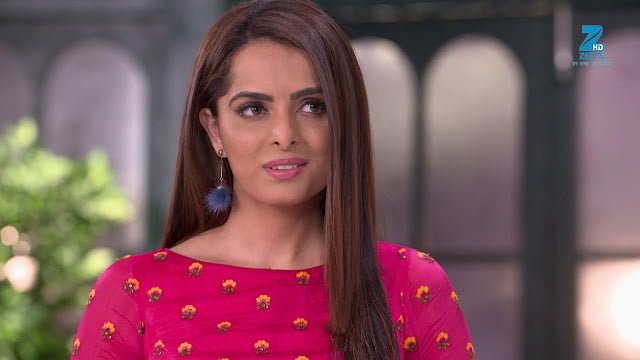 At home Shrishti cheerfully jumps and hugs Shrishti. She dances around with Sarla and takes her to the couch, and sits hugging her there. Sarla smiles that Shrishti is the youngest, and loves her the most. She kisses Shrishti. Sarla now gets emotional and says since they are friends now they will love each other. Dadi asks Sarla how she was released. Shrishti wasn’t ready to leave Sarla, she says she had been so afraid. Sarla says Preeta and Karan brought her home. Karan is parking his car. Janki says she must bring sweet then. Karan and Preeta come inside. Janki says she already was in favor of Karan and Preeta’s couple, everyone felt awkward. Sarla explains its about partnership. Janki apologizes as she always has a slip of tongue. Shrishti brings the sweet and thanks Karan for doing a
lot for them. She says he must be a hero for the world but for her, he is Super hero. She kisses his cheek. Sarla was apologetic as Karan stood open mouthed.In the car, Rishab scolds Sameer and tells him to make clients wait. He tells the driver to go to Preeta’s house. The driver says he would have to change the route. Rishab bursts over him for instructing him, then apologizes.Karan says he doesn’t eat sweet from market. Sarla insists on him to stay, she will just make sweet for him at home. Dadi appreciates Karan’s effort and says she is inspired how well her mother must be. Janki calls Shrishti to hand her sugar box in the kitchen. Dadi goes to give Janki dry fruits. Preeta asks Karan if he has thought what he would reply to his family. Karan says he would see, it will take people a lot of time to know Sarla has been released.At home, Kareena gets a call from inspector Chauhan that they released Sarla. Kareena asks if Rishab came there. The inspector says Karan took the case back. Kareena was shocked. Sherlin wonders if Karan trusts Preeta.
In the car, Rishab thinks he might not be able to help her even today. The driver says they have reached Preeta’s home. He gets a calls from Sherlin who hurries him to come home, Kareena is calling him. Rishab leaves Preeta’s home.Sarla had prepared dinner for Karan. Karan discuss with Preeta he might die eating so much. The family serve for him. Karan says he could have eaten at home. Shrishti sits to make Karan eat with her own hands. She was excited as Karan takes a bite from her hands. Preeta finally asks them to finish it up. Karan’s phone bell rings, it was Kareena. He goes aside to take the call. Kareena questions why he got Sarla released, she tells him to come home right away. Kareena sends the servant to call everyone here except Rakhi. Karan takes a leave, appreciating the food. Preeta goes behind him. Shrishti gives sweet to Sarla. Dadi tells her to call Kappu and inform him as well. Preeta comes behind Karan and asks what the trouble is. Karan says he never thought they would come to know so soon. Karan says he thought he would find a proof against Sherlin or her. Kareena must have gathered everyone at home. Preeta asks what he would tell everyone. She insists on knowing exactly what he would say. Karan says he would see about it. Preeta says she fears Sherlin doesn’t get alert about their suspicion. She might do anything, even harm him as well to save herself otherwise. It’s their mission to catch Sherlin red handed, until now she has shown everyone that Aroras are responsible. She suggest Karan that he must tell everyone she blackmailed him, she had an mms and she deterred to release it. Karan says Preeta isn’t that type of girl, he is infact not mms type man. Preeta questions if he is a respectable man? Karan now shouts at her that he doesn’t need clarify his character to her. He comes by his car. Preeta apologizes for getting him in trouble. Karan says he is only worried for Sherlin, as she got alert. He hurries towards home as there was a call again.Shrishti complements Dahi Bhalla, Sarla says she pours love in them. Preeta comes inside, Shrishti asks her to join as well. Janki says she already said, Karan is nicer than the two boys. Sarla says when she first met him she disliked him, but today she felt he seems to be rude only from outside. He helped them today.PRECAP: Luthras stood in the hall. Rakhi asks Kareena not to consider Preeta or her family, else they can also blame Kareena for the fire to finish her family. Kareena interrupts.
Facebook
Twitter
Pinterest
LinkedIn