A Ghanaian who has been South Sudan’s Commissioner-General of the National Revenue Authority since 2018, Dr Olympio Attipoe has been dismissed by the country’s Finance Minister.

According to eyeradio.org, the dismissal letter didn’t give any reason for the decision except “exercising the powers” derived from the National Revenue Act 2016.

Dr. Olympio Attipoe was appointed by President Kiir in 2018 with mandates of assessing, collecting, administrating and enforcing laws relating to taxation and revenues across the country.

Since his appointment, he established the Single Treasury Account, a public accounting system under which all government revenues, receipts, and income are collected into a single account.

Dolca Ad
The account was established purposely to ensure the accountability of government revenue, enhance transparency and avoid misappropriation of public funds.

Another Nana Akufo Addo’s appointee rejected
Dr Attipoe’s appointment also saw an increment in the collection of revenue with the body announcing the collection of 1 billion pounds and another 9.1 million dollars in non-oil revenue in January and February 2019.

Also in March, the body announced another collection of 1.2 billion Pounds and 4.7 million US dollars in the non-oil revenue sector.

In August, the body again announced that it collected 5 million dollars and another 1.5 billion pounds in the month of July alone.

The former revenue boss also helped in tax harmonization for various states including Jonglei, Torit, Gbudue, Jubek, and others.

In an exclusive interview with Eye Radio on Friday, Dr. Olympio Attipoe admitted being relieved from his duties but said for he could not share the reasons behind his dismissal.

“Yeah it is true I have been relieved, this story, for now, we don’t want to speak about it, it’s not appropriate for us to speak about it. Yes, the letter is true and let’s leave it like that,” Dr. Attipoe said.

However, in June this year, Attipoe said some government officials accused him of diverting money to his personal offshore accounts.

He denied the allegations and blamed some unnamed government officials for working for his failure.

“They don’t want the President to succeed, every single successful program in this country they don’t want it to happen, especially they don’t want any institution to function, in a civilized manner in an accountable manner, and as a result they are doing everything possible to make sure that the revenue authority is not established according to international best practices.”

This week, Dr. Attipoe proposed a new Taxation Bill 2019 to replace the Taxation Act of 2009.

The draft bill is expected to address, among others the relationship between the national and the state government in relation to taxation.

It also seeks to define the jurisdiction between personal income tax at the national and the state level.

The former Commissioner-General was appointed as part of the revenue mobilization project funded by the African Development Bank. 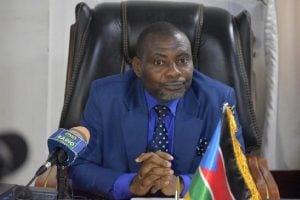 Let us Choose our Parliamentary Candidate, Don't impose anyone on us- Wassa East NPP Executives