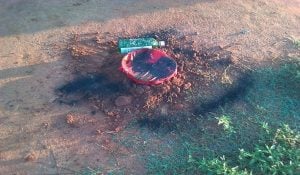 Teachers and Pupils of Nkrukan Presbyterian Basic School in the Yilo Krobo District of the Eastern region were gripped with fear Monday morning seeing a juju pot and Calabash planted in the school.

The red and black decorated pots with schnapps, eggs and some unknown items were planted in front of the KG block.

Out of fear, the teachers and pupils were unable to enter their classroom and have since become stranded.

The voodoo, is believed to have been planted by a man fighting the school over a parcel of the school land which he is claiming ownership.

According to teachers, Monday’s incident is the third time adding that the suspect has been threatening them with death. They also alleged that the KG classrooms are mostly shit-bombed by unknown persons.

A School Management Committee is holding a crunch meeting on the matter while a report has been lodged at the Police station.

The PTA Chairman, Samuel Tei Wayo told Starr News that “the person who committed the act went to an information centre Sunday warning that everybody must desist from the School land so we know him, we are going to cause his arrest but for the meantime, the KG pupil will merge with other classes.”

Some parents have stormed the school to withdraw their wards as the school management seek permission from GES to temporarily close down the KG school.

But Evelyn Asieni Teiko, Assembly Member for the Area has allayed fears of parents that everything is under control.

She stated that, nobody can claim ownership of the school land allocated by traditional rulers 70 years ago therefore assured an NGO helping the school construct some classroom block to have respite.

Mon Nov 5 , 2018
Action Patriots for Justice (APJ), a political wing of the ruling New Patriotic Party (NPP) in the Brong Ahafo, has warned of a massive parliamentary seats loss in the region in the 2020 parliamentary elections if the NPP Members of Parliaments (MPS) do not improve their human relationship between them […]