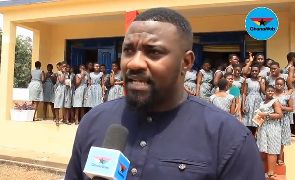 It has somewhat become a norm for Ghanaians to ask for selfies from
celebrities once they chance on such personalities. It is, therefore, no
surprise that actor and entrepreneur, John Dumelo received a similar
reception when he visited the Accra Girls SHS for the National Buffer
stock project.

The excited female students crowded around the popular ‘screen god’ as
he made for the school’s assembly hall, which was the venue for the
program. After several pleas to allow him attend the program and
take pictures with them later fell on deaf ears, John Dumelo gave in and
took some selfie with the girls.

The National Buffer stock project to feed free SHS students is an
initiative by the Ministry of Food and Agriculture and the National
Buffer Stock Company.

An amount of GH¢62,606,403, in three installment payments for the
delivery of food items to Senior High Schools in the country has been
paid to National Food Buffer Stock Company by the Ministry of Education.

This is to ensure that food items will be delivered to various school by
suppliers contracted by the Buffer Stock Company for the first term of
the academic year.

Find a man to marry, you are ageing – Lutterodt advises Yvonne Okoro