The Inspector General of Police, David Asante Apeatu and the Director General of Police Criminal Investigation Department (CID), COP Maame Yaa Tiwaa Addo Danquah were today conspicuously missing at an Accra High Court where judgement of a contempt case brought against them and one another was to be delivered.

According to MyNewsGh.com’scourt correspondent, it was gathered that the two police chiefs were out of jurisdiction despite a stern warning issued by the judge at the last sitting for them to appear before her or she will be forced to subpoena the Interior Minister, Ambrose Dery to produce them.

It is gathered that they had earlier written to the registry of the court informing the court of their absence and asking for the matter to be adjourned to July 16, 2019 or beyond by which time they would have arrived.

The court presided over by Justice Jennifer Dodoo subsequently adjourned the matter to July 22, 2019 while seething in anger over the gross violation of the court’s directives.

Family of the suspect Gregory Afoko who standing trial for the murder of former Upper East Regional Chairman of the New Patriotic Party (NPP), Adams Mahama  are citing the Inspector General of Police, David Asante Apeatu, the CID Boss and one Chief Inspector Nkrumah  for contempt for violating the court’s directive to release the suspect on bail.

According to relations of the suspect, they have met all the bail conditions set but the police administration is still refusing to release the suspect to them and is frustrating their single move to have him released.

It would be recalled that the Appeals Court on April 15, 2019 threw out a suit filed by the Attorney General’s Department for a stay of execution in respect of bail granted the suspect by an Accra High Court.

We built new stadia when Ghanaians were suffering, why oppose 450-seat chamber? – Kyei-Mensah-Bonsu 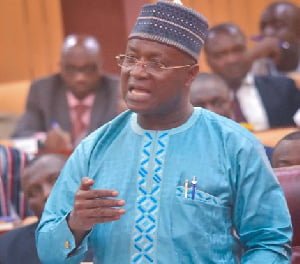