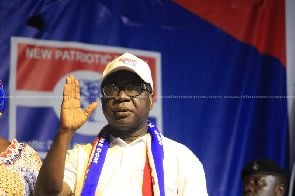 The revered Togbe Afede, Traditional ruler of the Asogli State and business magnate

National Chairman of the New Patriotic Party (NPP) Mr Freddy Blay has said he does not owe “anybody” an apology regarding comments he made against paramount Chief of Asogli State, Togbe Afede XIV.

As MyNewsGH.com readers will recall, Togbe Afede XIV received a ‘harsh’ response from Mr Freddie Blay over the former’s alleged ‘vote-buying’ comments on the latter’s 275 buses for the NPP. Freddy Blay had asked, in his reply, whether Togbe Afede was a ‘palmwine tapper’ when he made huge money as a Chief and a Businessman.

“Maybe he (Togbe Afede) got his money from selling palm wine to get there” Freddie Blay had said with a hand gesture.

According to Freddie Blay, he was worried someone “like Togbe Afede has come in”, as he (Togbe Afede) is a businessman himself. He ended by saying “Togbe Afede doesn’t know what he talking about”.

“It is silly. I am sorry to use that words. For people to think like that, I find it disturbing”. Freddy Blay said.

While the Asogli State demanded an apology for the insults, Togbe Afede himself gave a hint of his relationship with “palm wine business when he was speaking at the Accra International Conference Center to mark his 10th year of coronation; he revealed his mother sold palm wine to look after him and he was proud of his background:

“The person through whom God worked his magic to make this day possible is my mother, who many of you have come to know recently, was a palm wine seller”, Togbe Afede said.

“I know what it is to be deprived and I don’t wish that to remain the lot of my people; that is why in my inaugural address 15 years ago on the 4th of October 2003, I expressed the belief that my installation marked a new beginning for all of Asogli state,”he added.

Following that, the Secretary of the Asogli State Council, Stephen Tetteh, said the Council takes “strong exceptions to the statements, names, and comments in Freddy Blay’s reply as they are insulting and disrespectful”

The Asogli State threatened to take the next line of action if the party and Mr. Blay fails to apologize for the offensive comments.

After many months, Mr Freddy has finally replied. He was speaking to Raymond Acquah on Upfront on JoyNews.

“I don’t want to go into that. I don’t think I owe anybody an apology. I will prefer I don’t even talk much about that.”