Member of Parliament for Bawku Central Mahama Ayariga has begun a showdown with the Special Prosecutor Martin Amidu, stating he cannot avail himself in court Tuesday to be tried for alleged tax evasion and abuse of office.

Mr Amidu in March filed his first case against Mr Ayariga and subsequently wrote to the Speaker of Parliament to “release” the MP to appear in court on June 4 to answer some criminal charges against him.

But the MP who just returned from Abuja on parliamentary duties have responded to the SP describing the invitation as “inappropriately” hence will not honour same.

Justifying why he cannot attend court session on Tuesday, the MP said “absenting myself from sittings of parliament for a certain number of days without the Speaker’s permission, could be grounds for my removal from parliament”.

In a terse response to the SP dated June 2, Mr Ayariga raised key constitutional issues, stating unequivocally that the Speaker of Parliament has no right to “release” a sitting Member of Parliament to be arraigned in court.

“Be informed that any conduct on your part that in anyway impedes or obstructs my right to be in parliament on 4th June and represent the good people of Bawku will amount to contempt of parliament,” Mr Ayariga stated.

“I believe you have read article 122 of the constitution. The language of article 122 does bind even the Speaker of parliament,” he added.

The MP contended that Amidu’s letter inviting the Speaker of Parliament “to engage in an unconstitutional conduct” could cause the Speaker to also be cited for content of parliament.

In all things let’s give thanks to Allah – Kwesi Nyantakyi

Mon Jun 3 , 2019
Former President of the Ghana Football Association (GFA), Kwesi Nyantakyi, is looking to the Holy Quran for inspiration, a year after he was disgraced in an investigation by journalist Anas Aremeyaw Anas. The former CAF Vice President held an Iftar for muslim friends to break their fast on Sunday evening […] 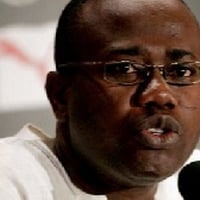