Many celebrities have quit acting to propagate the gospel. The most recent celebrity to join the wagon is Kumawood actor Bernard Nyarko.

Bernard Nyarko says he received the holy call last year December. He has since taken the preaching of the gospel seriously.

According to him, he declined a role offered to him by Kofi Asamoah because he felt it would hinder his evangelical work.

“Recently, Kofi Asamoah called me as he intended to cast me in the Away Bus movie but I was busy preaching. Now my pastoral or evangelical work is more important to me than acting. My preaching appointment is more than the acting appointment,”

”I’m not an ordained pastor but I can preach like the pastors anytime I’m behind the pulpit and God knows that, on 20th December last year, I was in the room, I couldn’t move…God arrested me and told me to preach the gospel”‘ he said.

We wish him all the best in his ministerial endeavours.

Mon Apr 29 , 2019
Popular Kumawood actor Bernard Nyarko known popularly known as Bishop has shared his sad story of how his own blood brother took him to some fetish just create a division between himself and his mother. According to him, all this happened prior to his return from the United Kingdom when […] 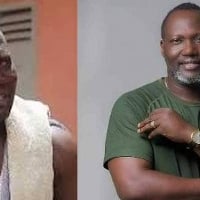