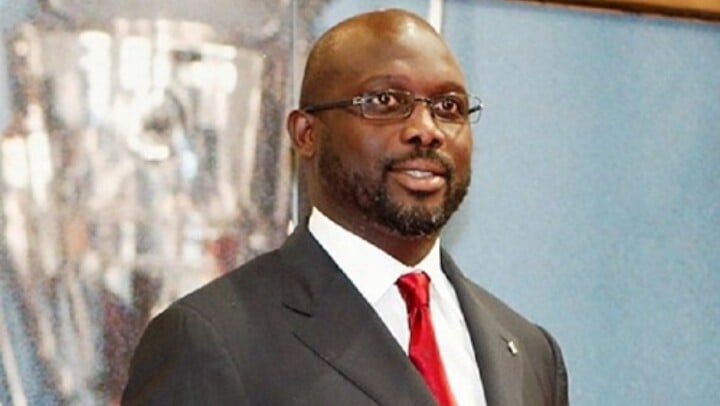 Former Ghana FA boss, Kwesi Nyantakyi has confirmed that in the events leading to him being ‘set up and disgraced’ in the corruption exposé by investigative journalist Anas Aremeyaw Anas, Liberia President George Oppong Weah came into the picture.

It had been in the rumour mill all this while as that part of the build-up was not captured in the Number 12 documentary aired worldwide.

Nyantakyi, speaking in his first interview since the premiere of the piece last June, said the ex-footballer who was at the time, a presidential candidate seeking ‘financial help’ to become the leader of his country, was promised by the Anas team that they were able to facilitate a meeting with a wealthy Sheikh. But it turned a ‘deceit’ as Weah was left stranded in the UAE for five days.

Narrating how he got hoodwinked into what he argues as the Anas trap, Nyantakyi told Net 2 TV:

“It all started with the deceased Ahmed Suale who met with Abu (the RFA Chairman for the Northern Region) claiming to be working with some UAE Sheikh in Dubai. That he completed Legon (University of Ghana) and that he has been away for about 8 years working in the UAE. That the Sheikh is wealthy and wants to invest in Ghana. That they came to Ghana during the Mahama era about their intended investment. And after the election, they want to continue and that they wanted to also sponsor the Ghana Premier League so we met with him [Ahmed] in Accra severally – about 8 times in Adjriganor. So one day he proposed that we travel and meet the Sheikh because the man wants to meet me by all means…

“I paid for my air ticket to Dubai not the GFA and it was only Ahmed I met on the first trip. He gave excuses like ‘the Sheikh was indisposed, couldn’t come because he had some engagement’, all lies. And that meeting was postponed.

“Then the second trip [pauses]. Before that, there is this politician [who Nyantakyi later admitted to be Liberia President George Oppong Weah] in one of our neighbouring countries, the Ahmed guy met with him and us at Golden Tulip that he could help him win the elections in his country. They promised to send him tickets for a meeting in Dubai which never came. But he insisted on going so I paid for him [Weah], his personal assistant and Abu on that trip [$26,000 for air tickets] and hotel allowances [$25,000] for five days. They were also left stranded, never got to meet that Sheikh and returned to Ghana,” he claimed.

Kwesi Nyantakyi was captured in an Anas Aremeyaw Anas investigative documentary engaging in corrupt and bribery activities. He was initially handed a provisional 90-day ban, which was later extended for 45 days. Following that Fifa slapped on him a life ban from all football-related activities.

NR:Examiners And Invigilators Demand The Payment Of Their Allowance from Nursing and Midwifery Council

I was at Korle-Bu when Ahmed Suale was killed – Anas

8 Ghanaian footballers who are doing great as financial…