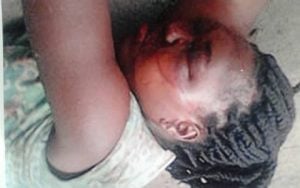 Woman raped and assaulted by land guards at Kasoa

Christiana Ofori a petty trader at Opeikuma a suburb of Kasoa in the Awutu Senya East District of the Central Region has been brutally raped and beaten by land guards but fortunately has survived to tell her story.

Narrating her ordeal to this reporter, the petty trader explained that on the 10th of August 2018, a group of land guards came to Opeikuma where she lives, to sell a piece of land which is also a foot path and a road to a prospective buyer.

According to the woman she questioned the land guard over the purported sale of land by these thugs to their prospective client. The move did not go down well with these land guards who accused the woman of being nosy and making them lose a prospective buyer.

“They threatened to deal with me” she added.

A week later these land guards came to lay ambush in Opeikuma in a bid to show her a lesson by killing her.

Osei Nyankonton in an interview with madam Christiana Ofori mentioned that, on that fateful day she was on her way to the market and she met these land guards just close to her house.

They attacked her and engaged in an argument with her then one of them passed behind her slapped her held her to the ground holding her neck.

“He eventually took off my paints and raped me as the rest of them watched as spectators” the woman lamented.

After falling unconscious the land guard taught she was dead so they dumped her body at a nearby stream close to her house.

The woman added that few hours later she regain consciousness but couldn’t move her legs so she had to crawl on the floor to an open space upon hearing the sound of his husband’s motor bike.

She was later taken to the Winneba government hospital where doctors confirmed that she had indeed been raped.

Christiana Ofori was quick to add that she was able to recognise one Mensah who was part of these land guard from the onset of the whole issue, adding that if the Kasoa Police is able to apprehend Mensah he would be able to show the whereabouts of the rapist land guard and all those involved in the crime.

For now the issue is before the Kasoa Divisional Police Command pending investigations into the matter.

Thu Aug 30 , 2018
Aduana Stars coach Kenichi Yatsuhashi abandoned his team midway through their 6-0 thrashing at the hands of Raja Casablanca on Wednesday. The American-Japanese trainer refused to head into the dressing room at halftime to give the team talk. He rather went into the stands where he watched the remainder of […]