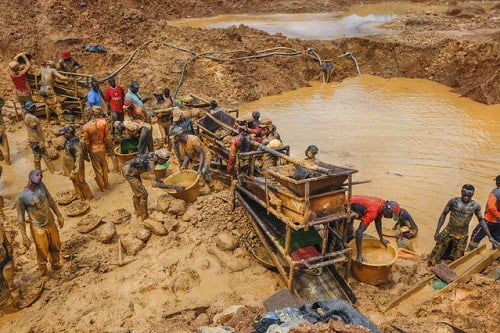 Galamseyers who were until the 2016 general elections were conducting their ‘business’ smoothly albeit illegal greeted the then candidate Akufo Addo’s promise of reforming illegal mining when elected with euphoria and ecstasy but now dismayed and disheartened after the introduction of the government’s widely touted community mining scheme (CMS).

The New Patriotic Party’s (NPP) government instituted the Inter-Ministerial Committee on Mining (IMCM) in 2017 after its historic election which in turn gave birth to community or group owned mining as an alternative to the destructive galamsey illegal mining activity.

Six months after its successful launch at Bawdie in the Wassa Akropong municipality of the Western Region amid optimistic pomp and pageantry and its expansion to some other mining districts, the New Patriotic Party government’s “meant well” initiative of community mining concept had not only been haphazard but ensnared with chaotic maelstrom and utmost confusion.

Authoritatively and not mincing words, one would contend that there is no notable difference between the age-old galamsey methods of alluvial and ‘changfan’ as against the same methods by which the community mining concept is thriving both by its method of extraction and practice.

The only dissimilarity between the two is the latter having signpost indicating their existence as against the former’s unmarked sites by which the gold mining process is being carried out.

Piloting the community mining programme on Wednesday, 24th July, 2019, the president said “mining will be done the right way, within the tenets of the law and will not destroy our natural resources”.

Continuing, he said “today, we are launching a type of mining that will benefit all of us. I am here to plead with the young men who are participating in the community mining to do their best to adhere to all the laws and do a good job, so that money will return to Wassa Amenfi. The money will come,”

The NPP government’s ‘messiah’ (community) mining scheme vis-a-vis the galamsey in my humble observation and in the eyes of all well-meaning inhabitants of mining areas is illusioned, delusioned and trepidatiously disillusioned.

The community mining programme was meant for the initial four thousand and five hundred (4,500) small scale miners the government’s claimed to have trained on responsible mining practices at University of Mines and Technology (UMaT) in Tarkwa and many others who were yet to be trained.

The programme after its implementation has been fraught with confusion and challenges because it does not differentiate between those who received the ‘formal’ training at the university and those who seldom have little or no knowledge in mining as there is no indication as to if those licensed to mine without training will ever be trained on responsible mining to protect the environment and counter global warming.

It gives equal chance to people who received the UMaT training and the ones who are yet to receive the training or those who have not had any training whatsoever in responsible mining processes as community mining license and identity cards are issued for them to ply their trade without any tangible supervision.