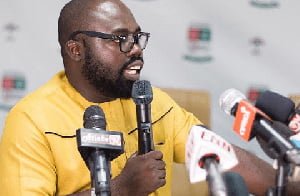 Deputy General Secretary of the opposition National Democratic Congress (NDC), Peter Boamah Otokunor has revealed that 5,500 of the double track students under the Free Senior High School (SHS) are pregnant.

He blamed the Akufo-Addo led administration for the lack of a tack in implementing the Free SHS policy, subsequently dividing into tracks and making the teenage female students prone to pregnancy.

“The last time we conducted a survey in Ghana and realized that averagely in every constituency, 20 teenage girls under the double-track system are pregnant”, he revealed on Kumasi-Based Otec Fm monitored by MyNewsGh.com.

Asked by the host why they are shielding such a survey he responded “It is all over…we have been talking about it. The males among them if care is not taken they may also join bad groups and become criminals or wee smokers”

The NDC executive said he felt “Akufo-Addo has lost touch” with issues because Mahama and the NDC have never opposed the Free SHS policy.

“Students enjoying free SHS are being bitten by mosquitoes because there is no school building to sit in to learn; they are getting pregnant here and there because when their track ends and they go home, they have nothing to do; that is why we were advocating for infrastructure,” he said.

Otokunor said the president is not in touch with the reality in this country as he is completely out of touch because NDC has continuously indicated that they would review the free SHS policy.