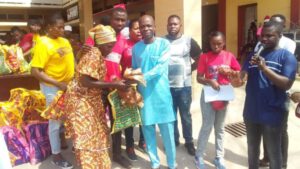 Mr Evans Kofi Kwafo, CEO of EKK Charity Foundation presenting some of the items to a widow at the Christmas day ceremony at the precincts of Ashh fm

A famous philantropist, Mr Evans Kofi Kwafo, Chief Executive Officer for EKK Charity Foundation on Christmas day shared about 1, 000 pieces of wax prints as well as chicken and rice to widows and the aged in Kumasi.

The gesture which forms part of projects that are undertaken by the non-governmental organisation ( NGO) had Ashh fm supporting as co-sponsors for this year.

Presenting some of the items to the aged and widows, Mr Kwafo encouraged them to be of good cheer.

He noted that they have not been forgotten, adding that the EKK Charity Foundation is committed to seeing to the welfare of the aged, widows as well as orphans.

“It is always easy to feel forgotten when  you have nobody to care for your needs but I want to assure you who are gathered here that God and the EKK Charity Foundation is concerned about you”, the CEO noted.

NEW DRIVE:
Speaking to this reporter later, Mr Kwafo said having seen the aged and widows he had realised that the Foundation has to do more for them.

He observed that many had frail bodies with some showing signs of dehydration.

The Foundation, he indicated would from henceforth organise period medical screenings for them in communities within the Ashanti Region.

This, he revealed would help doctors to deal with situations that may be needing attention and better care.

“Coming here today I realised many of the aged and widows have frail bodies as well as other medical conditions and so we have decided to add medical screenings to our next project for them early next year”, Mr Kwafo posited passionately.

APPRECIATION:
Madam Alice Danso, a widow and resident of Santasi commended Ashh fm and the EKK Charity Foundation for carrying out a large scale gesture.

She noted but for the gesture it would have been difficult for her to enjoy proper meal this Christmas.

Opanin Kwadwo Krah, a 74 year old widower said the gesture was timely for him.

He said but for the free rice, chicken and other items he was going to use his pension money to buy same stuff for Christmas.

“May God bless the EKK Charity Foundation and Ashh 101.1 fm for this gesture because it has served us well”, Opanyin Krah prayed

Our Secretary Is Not Corrupt - NPP UK defend Secretary

Thu Dec 26 , 2019
The attention of the NPP UK has been drawn to a web article “Akufo-Addo Appoints Convicted Corrupt Secretary of NPP UK to Head Ghana Health Promotion Division at GHS Headquarters”; and “You came to fight corruption indeed-NPP UK fires Akufo-Addo for appointing indicted ‘corrupt’ Dr. DaCosta Aboagye”. The President has […]