The former Deputy Minister for Information and Labor Relations and Deputy Director of Legal Affairs of the National Democratic Congress(NDC) has stated that even though the EC is an independent body under the 1992 Constitution of Ghana, the EC does not work in a vacuum. The EC is a public institution funded with public funds so its independence is subjected to the will of the people and therefore Mrs. Jean Mensah and her Commissioners must listern to the overwhelming majority of Ghanaians who are of the view that compilation of a new voter register is unnecessary, untimely and blatant dissipation of public funds.

Mr Baba Jamal, who is also a Lecturer at the Madina Institute of Science & Technology in Lakeside, Accra, said this in an interview with a private radio station in Accra, Daddy FM. He reiterated the point that there was a lot of wisdom in the reasons for the Establishment of the Inter Party Advisory Committee(IPAC) to work with the EC in the performance of its duties.

IPAC was borne out of the need for consensus building among the political parties and with the EC. So the current arrogant and lack of consultations on the part of the EC is worrying and posses a danger to our democracy, Baba Jamal said.

What is the point in establishing a Committee of Eminent Personalities made up very respected person in this country only for the EC to disrespect their advice, Baba Jamal questioned.

People are worried and some even scared by the current unrest in the country all due to the intransigence of the EC, a body which should be building consensus but rather it is displaying arrogance, snobbishness and extreme insensitivity, all this unrest and demonstrations could have been avoided if EC has been a bit proactive, Baba Jamal added.

Sat Jan 25 , 2020
Ghanaian-UK based gospel artist, Sonnie Badu has reemphasised his assertion that Ghana is suffering from adverse consequences stemming from the decision by past leadership to name the nation’s biggest airport, the Kotoka International Airport after a former military general. The multiple award winning gospel act says his call is from […] 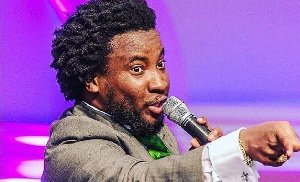