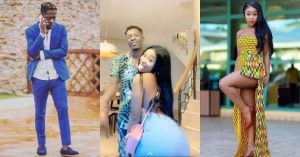 Efia Odo seems to have confirmed her wildly reported affair with Shatta Wale. In reacting to the news that she slept with the musician, Efia Odo said her ‘tonga’ is not a national treasure, therefore, she decided who enters and who does not.

She wrote on Twitter: “Guess my pusssy is a national treasure since all you fvckers are so worried bout who and what is entering inside.”

By her post, Efia was making it clear to her critics that her ‘tonga’ belongs to her and so people should not care or bother about who she allowed to enter or come out of it.

Efia Odo has, however, deleted the post from Twitter, but YEN.com.gh managed to obtain a screenshot before it was deleted.

The news went viral as published by YEN.com.gh that an after-sex video of Shatta Wale and Efia Odo has gone viral.

Shatta Wale claimed to have ‘destroyed’ Efia’s ‘tonga’ in the video.

Since then, the two, especially, Efia Odo, have been trending in the news.

Perhaps, it is for this reason that she has responded to her critics, so that they would just stop worrying about whom she slept with. Meanwhile, this is not the first time it has been reported that Shatta Wale and Efia Odo have had sex.

READ Majesty spotted hanging out with Shatta Michy without his father
In an earlier report by YEN.com.gh, the two were caught in the act in the video which was published. Also, Efia Odo had gone almost naked in a photo she released before her affair with Shatta Wale came public

U23 AFCON QUALIFIER: Terkpetey, Dauda to lead attack as Tanko names strong side to face Algeria