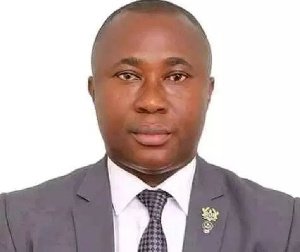 The Bono East Regional Minister, Kofi Amoakohene, on his maiden tour of the region, has called on staff members of assemblies to work hard to fast-track the development of the new region to meet the expectations of the people.

He cautioned that those who are in the habit of working lotto, drinking alcohol, among other counter-productive tendencies during working hours, would not be spared when caught.

“We were part of six regions created and so we must work hard to become leaders in everything that we do. As such, I don’t expect you to work lotto during working hours or drink alcohol before coming to work or loiter around during working hours,” the minister told the Techiman Municipal and Techiman North Assembly (Tuobodom) staff during a tour.

Mr. Amoakohene who is also the Member of Parliament for Atebubu Amanteng called on the Techiman Traditional and Tuobodom Traditional councils to introduce himself and a team of Regional Co-ordinating Council heads.

He reminded heads of departments that they have a huge responsibility to facilitate rapid development to improve living conditions of the people.

“If our new region is to develop faster, it must be seen in improvement of revenue generation, service delivery and environmental cleanliness. It must be reflected in good roads, good healthcare delivery, better education, reduction in crime, among others. Governance is a shared responsibility so we must work hard to meet the aspirations of the people,” he stressed.

He said he was running an open-door policy so people could walk to his office with innovative ideas to help move the fortunes of the region, saying “don’t come with complaints and excuses but ideas that will create jobs, improve service delivery and good roads.”

At the Techiman Traditional Council, he was welcomed by Akwamuhene, Nana Owusu Agyari and other members of the council in the absence of the Techiman manhene Oseadieyor Akumfi Ameyaw III.