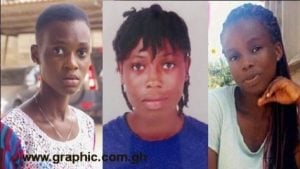 The families of the three missing girls in Takoradi in the Western region say they do not believe that their relatives are dead.

The families of the three girls who were allegedly kidnapped by Samuel Wills – a Nigerian – last year say, they still believe that the girls will be found.

Their comments follow an operation carried out by a team of police personnel from the Criminal Investigations Department (CID) headquarters and the Western Regional police Command in an uncompleted building at Kansawrodo near the Methodist Senior High School girls hotel where the first accused Samuel Wills was living.

During the operation the police retrieved some remains suspected to be human parts from a septic tank close to the house.

Kate Quayeson, an elderly sister of Ruthlove Quayeson; the second girl who was kidnapped told Empire News’ Emmanuel Ohene-Gyan that they do not trust in the outcome of the operation carried out by the police describing it as a diversionary tactic.

Mr Francis Bentum, father of Priscilla Blessing Bentum the first girl to be kidnapped also told Ohene-Gyan that after visiting the crime scene Friday evening about 8:30 pm after the Police left, he concluded that the human remains could not have been kept in the septic tank.

According to him, the police failed to inform of the operation before it was carried out Friday evening.

Two Nigerian suspects are standing trial over the kidnapping of the girls.

Ghanaian officials had said investigators from the United Kingdom and the United States of America were helping to search for some girls.

Sat Aug 3 , 2019
A mobile money vendor has been robbed of an amount of GH¢23,500 by a uniformed policeman and his accomplice soldier at Nkawkaw in the Eastern Region. The victim last Wednesday at about 11:30am withdrew the amount at Fidelity Bank, Nkawkaw branch on his way to Akim Sekyere but on […] 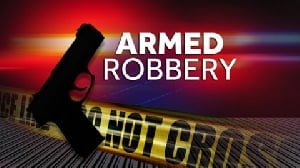