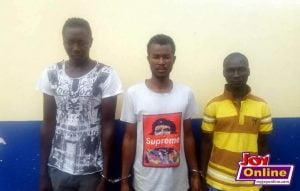 Police in Somanya, in the Eastern Region, have apprehended four persons suspected to be ringleaders of a car stealing syndicate in Somanya and its environs.

The suspects were arrested on the dawn of Sunday in Somanya and Ashiaman Middle East after police received a tip-off about their operations.

Police say they first arrested Abadji Tetteh, a 42-year old driver, and Solomon Kojo 24, who led them to Ashiaman to arrest a third suspect, Latif Alhassan, a 22-year-old scraps dealer.

Eastern Region Police PRO, DSP Ebenezer Tetteh, stated that Latiff bought two stolen vehicles from Abadji and Kojo at the cost of GHS3,000 and GHS 2,000 and resold one of them to Francis Sam, a driver at Wejia at the cost GHS10,000.

According to him, Police apprehended Sam and retrieved one of the stolen vehicles from a spraying shop in Accra belonging to one Kwasi Nyamekye.
Kwasi has also been arrested by the police for his involvement in the crime.

DSP Tetteh confirmed that they have begun looking into the case, adding, that the suspects will be put before a court.

Wed Sep 5 , 2018
The National Disaster Management Organisation (NADMO) has confirmed the death of a 13-year-old boy who drowned in a dam in the Northern Region, following the spillage of excess water in the Bagre Dam in Burkina Faso, and days of rainfall in the area. The dam in which the boy drowned […]