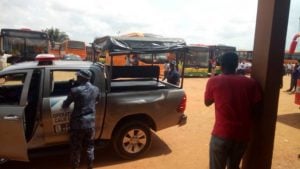 Hundreds of passengers have been left stranded after staff including drivers of government-run Metro Mass Transport declared a strike Wednesday.

The main station at Abrepo Junction in Kumasi has been deserted as frustrated travellers resort to private transport.

The staff are protesting over the dismissal of one of them who according to them has done no wrong.

The staff are also accusing management of not doing enough to improving their condition of service.

Management of the state transport company, however, has been engaging the aggrieved workers to suspend their actions but that has yielded no results.

Security has since been tightened to prevent any eventuality.

Meanwhile, leadership of the TUC has been meeting management over the development.

Wed Jul 3 , 2019
A human rights lawyer, Mr Francis-Xavier Sosu has begun an online petition to collect signatures to pile pressure on the government to release Mr Gregory Afoko, who is being held for the alleged murder of Mr Adam Mahama, the former Upper East Regional Chairman of the New Patriotic […]