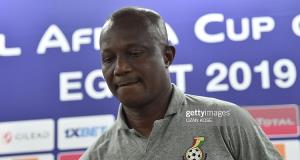 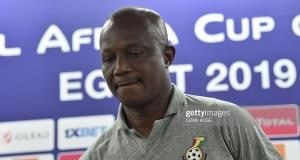 Thanks to his fully rolled and locked glass windows, Kwesi Appiah could only suffer verbal abuse at the hands of the young man, whose identity is yet to be established.

Eye witnesses told Ghanacrusader.com that the incident, which occurred at the newly opened under-bridge road that connects Spintex to East Legon was very embarrassing.

The coach was in his ash-coloured 2015 Toyota four wheel SUV registered, heading towards East Legon when the young man spotted him.

“Are you a coach? You are very stupid. The whole Ghana, you are the most useless. We don’t want you as coach,” the young man vented.

Speaking in his native Fante language, the young man further harassed Kwesi Appiah as the traffic slowly moved, saying, “Who told you that you are a coach? You are lazy, no intelligence. You don’t know anything about football and coaching.”

Other drivers at the scene tried restraining the young man to no avail and Kwesi Appiah was perhaps lucky that the traffic eventually eased for him to drive away.

He pretended to be receiving a telephone call as the verbal assault and abuse flowed from the young Ghanaian.

Kwesi Appiah’s tactical approach to games has become a major talking point among Ghanaians since the exit of the Black Stars from the ongoing AFCON in Egypt at the round of 16.

After reaching home, the security of Kwesi Appiah has become a matter of concern as a few days ago, it was alleged that another angry Ghanaian had attempted entering his home to attack him.

Many enthusiastic young men have reported of Kwesi Appiah and the Black Stars spoiling their bet slips after recording bad results in the AFCON.

Though it has been reported that Kwesi Appiah has a contract which will expire in December this year, there is real anger among Ghanaians to see him continue as coach of the national team.

2nd Edition of Baby Jet U16 tournament tips off