The youth wing of the opposition National Democratic Congress (NDC) has given the Police a 24-hour ultimatum to arrest the National Youth Organizer of the New Patriotic Party (NPP), Henry Nana Boakye popularly known as Nana B for allegedly assaulting the Communications Officer of the NDC, Sammy Gyamfi.

National Youth Organizer of the NDC, George Opare Addo, addressing a press conference on Friday, said the police will incur their wrath if the request is ignored.

“We demand the immediate arrest of the violent thug, Henry Nana Boakye within 24 hours. If by Monday, the arrest has not been effected, we will consider this an abdication of the responsibility of the police administration. We will have no other option than to mobilize our members to demand justice for our comrade,” he added.

Read also Sam George didn’t go as MP; he was there to create chaos and got served – Wontumi

Nana B in a video which has gone viral on social media is seen assaulting Sammy Gyamfi in the studios of Accra based radio station, Asempa FM.

The incident is said to have occurred in the course of the station’s political talk show, Ekosii sen on Friday afternoon.

It is unclear what triggered the attack but reports claimed Sammy Gyamfi was blasting the NPP for the violence recorded at the Asawasa West Wuogon constituency by-election when he incurred the anger of Nana B.

Addressing a late-night press conference, George Opare Addo condemned the attack on Sammy Gyamfi which he said come on the back of a recent attack allegedly unleashed on the Deputy National Youth Organizer of the NDC, Eric Edem Agbana by the same Nana B.

“We condemn in no uncertain terms the assault on no mean a person than a national officer of our party. It is worth noting that this same thug of a Youth Organizer, Henry Nana Boakye yesterday instructed bandits associated with the NPP to attack our Deputy National Youth Organizer, Eric Edem Agbana.”

“The NPP has demonstrated yet again the ‘All die be die’ mantra posited by their President, Nana Addo Dankwa Akufo-Addo has become their political philosophy. Indeed this is not an isolated case of gross violence displayed by the NPP under the Akufo-Addo led government,” George Opare Addo added.

He again called on the Asempa FM to blacklist Nana B from their platform.

Meanwhile, all efforts to get a response from Nana B have proved futile.

This comes on the back of pockets of violence that occurred in the Ayawaso West Wuogon constituency during a by-election held in the area on Thursday.

Some National Security Operatives allegedly fired gunshots at a polling centre at La Bawaleshie, injuring about six persons believed to be NDC supporters during the election on Thursday.

NDC MP for Ningo-Prampram Sam George was also assaulted in the process when he received slaps from some security personnel providing security at a polling station in the area.

The NDC subsequently opted out of the race claiming they took the decision to forestall further attacks on their members.

Police are however investigating the issue. The attacks have been widely condemned by civil society organisations including CODEO, OccupyGhana among others.

Sat Feb 2 , 2019
Members of pro National Democratic Congress (NDC) vigilante group “The Hawks” have stated categorically that no amount intimidation from the security agencies especially the police service can stop them from protecting party members in the 2020 elections, MyNewsGh.com reports. Six persons were reportedly shot at the Baweleshie polling centre during […] 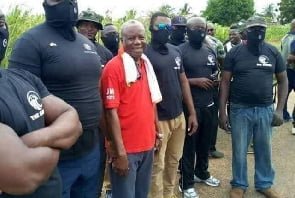