The youth say Asanco Gold Mines Ltd has demolished all their properties.

The company has destroyed their roads barely week ago.

“They have blocked our bridge with sand and stones during the construction of a road to their site and this move has caused erosion making it cumbersome to ply it”.

Upon the demolishing of the properties, the indigenes petitioned the company for compensation but the mining company has been reluctant to settle the compesation.

Consequently, about 100 of them decided to storm the mining site with cutlasses, construction tools, stones, sticks/canes to express their satisfaction against the company.

The protest compelled the authorities of Asanco Gold Mines Ltd to deploy soldiers and police officers numbering about 30 to intervene the situation.

The youth could not be submissive because they were overly furious on how issues were rising up.
However, the security forces managed to control the infuriated youth without injury or harm.

The youth declared in an interview that “We have made series of approach to the DCE and authorities of the mining company to seek for response but no relevant response has been given out. So we had to mobilize ourselves with our tools and protest against the company”.

Other sources indicates that, the company has not been able to employ the youth in the Abore Communiy after three years of operations.

This a result has triggered their anger to bear teeth on the company.

They stated again that chiefs and elders of Manso, District Chief Executive Officer of Amansie West must dialogue with the company to manage their activities well else they will deal with them. 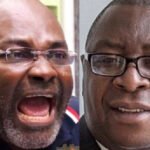