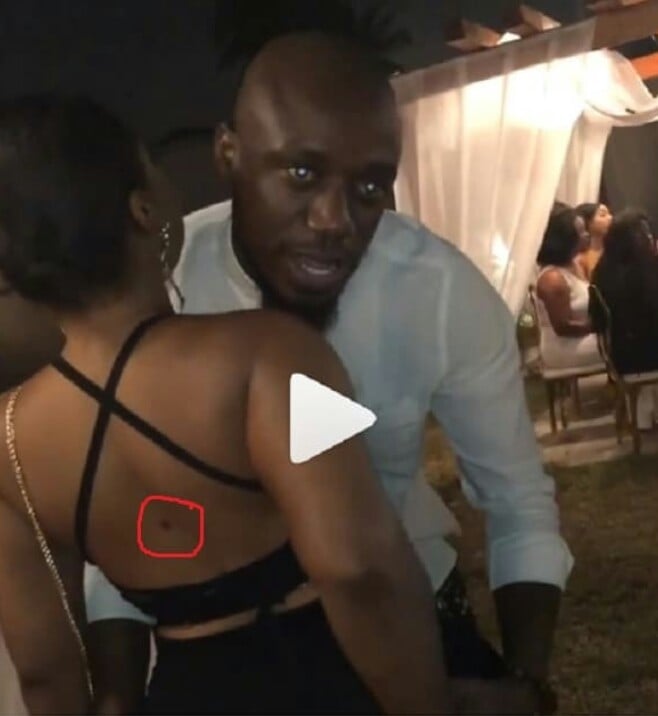 The mark is found at the back of Moesha, at the spinal cord area to be precise, and fans of the actress who could be ‘doctors’ in their own rights have concluded that it is a scar from her alleged body enhancement operation. The video was reportedly taken at an event in Accra recently, where Moesha had attended a birthday party. The alleged liposuction scar on Moesha’s body (circled).

She was captured in the hands of a young man who was busily playing with her backside. It is in the course of Moesha turning her body for the man to play with that the mark became visible.

According to the young man, he was actually trying to figure out if Moesha’s body was indeed natural of fake. Just then two of her fans, Gold Coast Child, and Anas, raised issues over the mark.

Anas wrote that Moesha’s body cannot be real because of the “liposuction scar” at her back.

“@iamanas12 liposuction is not done on the back especially by the spinal cord….” However, Anas, who YEN.com. gh cannot tell if he is a medical doctor hit back belittling the response from Gold Coast, indicating that what he had seen was a scar. iamanas12: “@gold_coast_child What do you know about liposuction?”

Another fan, Young, who seems interested about the topic asked to be told what liposuction is de_young_paparrazzi: “@klasymimi what’s the meaning of that word liposuction?” Interestingly, some of her fans still believe that Moesha’s body is not real, with one of them saying that unless she touches Moesha’s body herself, he will never be convinced that it is natural.

rascooveli.sanfo1: “@moeshaboduong as for me till se a don’t touch it I can’t believe.” Love also claims that Moesha’s body is not natural lovecandy2candy: “I wish it’s real too bad fr her.”

However, Moesha Boduong herself spoke on the back and forth debate over her body, wondering why Ghanaians won’t believe that her body is natural and just leave her alone.

She wrote: moeshaboduong: “So u people believe is not real smh my haters have really worked hard in convincing u guys ” Following this heated debate over Moesha’s body, YEN.com .gh researched on ‘scar of liposuction; and here is what we found.

“The [liposuction] procedure does leave a few scars as small incisions have to be made in order to extract fat. However, the scars are very small, a few millimetres in length and are made in discreet locations. They are nearly indiscernible. YEN.com .gh however, cannot tell if that mark at Moesha’s back is a scar from her liposuction or not.

Moesha Boduong has been in the news recently following an accusation by fans that she was deformed and so holding her hip in a photo to stop it from falling off. She was also in the news for putting her breasts on display in another photo she took. Moesha has indicated that she would be getting married soon.

We charge to meet our needs -Tagoe Sisters

Mahama and Lordina represented me when I lost everything…