A young man alleged to have stolen an unregistered Hyundai Santa Fe has been nabbed by police and some youth at the Madina Atomic Junction roundabout after a hot chase.

An eyewitness told 3news.com, the suspect drove on high speed from the Rawlings Circle towards the roundabout, an act he said raised suspicions from onlookers.

According to the eyewitness, the suspect on reaching the roundabout could not wait to go with the traffic either to head towards Haatso or Legon, so he chose to drive towards the oncoming cars from Accra, obviously on a wrong side of the road [driving towards Legon on the Presec side of the road].

This, the eyewitness said created a chaotic scene resulting in the suspect knocking down a pregnant woman and hitting two other cars. In his attempt to force the oncoming cars to make way for him, the car somersaulted and some youth pounced on him.

Two police officers and a military man who were also driving in a Toyota V8 around the area came to rescue him from been lynched.

Tue Jul 23 , 2019
Currently, in Ghana, every individual wants to be rich in order to enjoy the luxury of life. People because of this are forced to engage in all manner of things in order to make life better for them. But actor Prince David Osei believes everything has its season and time and […] 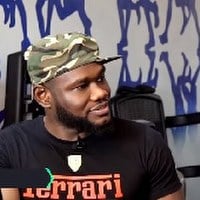