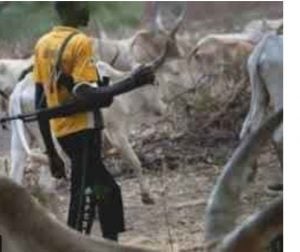 The people of Agogo in the Asante Akyem North District of the Ashanti Region are still battling with nomadic Fulani menace.

About 49 people have been killed and many acres of farms have been destroyed by the Fulani herdsmen.

Government, in an attempt to solve the menace formed police and military team to deal with the menace through a program called Operation Cow Leg.

The District Chief Executive of Asanti Akyem North, Francis Oti Boateng told Adom News’ Kwame Kulenu that about 95 percent of the Fulani herdsmen have been cleared and the remaining five percent are those from other districts who cross boundaries into Agogo at night and graze on peoples farms.

“We are still faced with the Fulani saga because the security team here only do day times while some of the Fulani herdsmen take their cattle grazing at night,” he said.

The DCE said this when World Vision Ghana and a team of journalists visited him during a tour in the District.

Francis Oti Boateng said herdsmen have been shooting at security men even during the day and night.

“We don’t know what can happen in the night after some police and military men were shot in broad daylight.”

He said they are therefore re-strategizing on how to fight the menace.

He, however, congratulated World Vision for the numerous projects they have done in the area.

The DCE explained that the Assembly budgeted to drill a borehole for four communities, but before they got there to do a survey, World Vision had already dug some for all the proposed four communities.

According to him, each of the boreholes could have cost GHC8,000 so this intervention by World Vision has saved them GHC32,000

Fri Aug 10 , 2018
Renowned preacher, Evangelist Stephen Oduro is in full support of churches paying taxes to government. According to him, government has taken too long in taking monies from the churches for nation building. Speaking on Asempa FM’s Ekosii Sen programme Friday, the evangelist bemoaned the extravagant lifestyle of pastors at the […]