The intention to construct an ultra-modern edifice to house 450 Members of Parliament has received tumultuous receptions from a section of the Ghanaian populace.

It has generated uproarious commentaries from a cross section of Ghanaians who have said that the $200 million budgeted for the project could be put to a judicious use instead of building a new Parliamentary chamber.

This decision, we are told, was arrived at by the Parliamentary Service Board which includes the leadership of both Majority and Minority members of the house.

The architectural designs of the proposed project was unveiled and the leadership of both the NPP and NDC Members of Parliament were seen in the photos. Happiness was written all over their faces.

No sooner had some Ghanaians expressed concerns about the project than some Minority MPs started distancing themselves from the issue.

Ras Mubarak and Samuel Okudzeto Ablakwa have publicly raised concerns about the propriety of such a project at this material moment.

This is puzzling in the sense that the Minority Leader, Haruna Iddrisu duly represented the Minority MPs. Why are they claiming blindness to the whole issue?

These Minority MPs are being disingenuous in this matter. They cannot claim not to be aware of this matter when their leaders were integral part of the decision making process leading to the adoption of this proposed project.

If these Parliamentarians hold views contrary to the announced one, it behoves on them to express these sentiments on the floor of the House but not to come out here to engage in any populist and gimmicky agenda.

Ablakwa and his gang should go and disagree with their leadership in Parliament. Their public pronouncements run counter to what they sent their leaders to go and agree on.

P.K.Sarpong, Whispers from the Corridors of the Thinking Place. 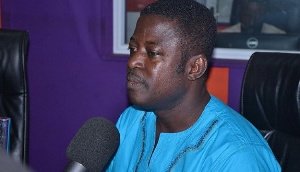