5 Arrested For Smuggling Over 4000 Bags Of Fertilizers 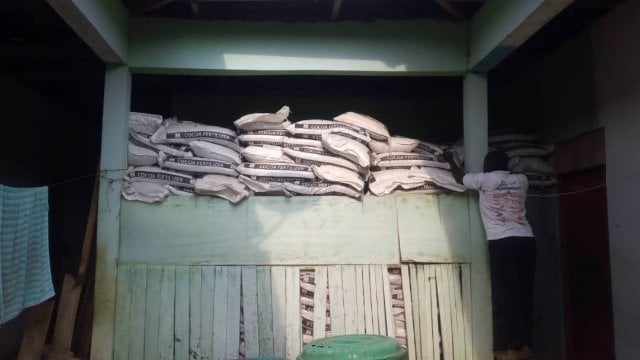 Five persons have been arrested by the Police in Somanya for transporting over 4,000 bags of smuggled fertilizers meant for cocoa farmers in the Western region.

They were caught at Asomdwoe Krom, a suburb of the Easter region town, offloading one of the trucks with registration number GM 206-17 in a private residence.

Four of the suspects are drivers of the impounded articulated trucks carrying the consignments while the other is the receiver.

The arrest was made in the residence of one Patrick Nartey who claims to be a cocoa farmer based in the Western region but has a cocoa farm in Asenisi, a suburb of Somanya.

Police sources say, when they contacted the transport officer of the company that transported the goods from Tema to Somanya, he could not explain how the fertilizers meant for cocoa farmers in the western region found its way into a private home in Somanya.

Last week, President Nana Akufo-Addo called on the public to help the security services to flush out “greedy criminal” fertilizer smugglers to ensure farmers enjoyed the full benefit of the subsidised fertilizer programme.

“Traditional rulers and indeed all citizens should be on high alert to ensure that smuggling of inputs across our borders is stopped”, he said.

The President made the call while addressing a durbar of chiefs and people of Wechiau in the Wa West District of the Upper West Region as part of his two-day working visit to the region.

He said the government was subsidizing fertilizer by 50% and that money was the taxpayer’s money which should not be allowed to go waste through smuggling.

“We know if farmers get the subsidized fertilizer, they will improve agriculture productivity and we should not sit down and allow a few criminals to come and take our fertilizer and go and sell in Burkina Faso for their own greedy pockets”, he said.

“All of us are required to police the fertilizer and make sure that the money that is coming from the sweat of Ghanaians are used to the benefit of all Ghanaians”, he said.

Wontumi , Sam Pyne influenced to push me out – Manaf Ibrahim bites back