Professor Kwabena Frimpong Boateng, Minister for Environment, Science, Technology and Innovation (MESTI) has once again donated t-shirts and footballs as well as jerseys to six constituencies of the New Patriotic Party (NPP).

The beneficiary constituencies were Wassa West, Wa East and Wa Central with each of them receiving 10 sets of footballs and ten sets of jerseys.

Three other constituencies that also received support were Suhum, Tain and Ahafo Ano North as they had 400 NPP branded t-shirts each.

Presenting the items to two representatives from the Suhum and Tain constituencies, Prof Boateng said it was important that NPP branches that needed support to attend to the house to house campaign are given same to make their work easy for them. 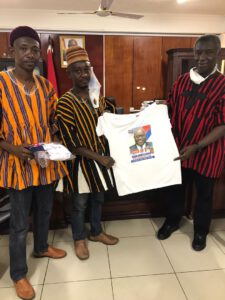 MORE ASSISTANCE:
The Minister noted his readiness to continue to provide such assistance to every constituency he identifies as needing same.

He said his desire is to support party people working to propagate the good works of the New Patriotic Party.

So far, he noted that more than 15 constituencies have been identified and supported with such items.

Other communities identified, Prof Boateng said would also before the end of this month receive assistance to enable them reach all communities with the messags of the NPP.

APPRECIATION:
Commending the Minister for the gesture, Bill Darlington Boampong and Quathafi Pe, representatives from the Tain and Suhum constituencies said the donation was timely.

They noted that they needed to make the NPP more visible in every part of the communities they operate from.

The T-shirts and other support, both men stressed would make the task easier to undertake.

They however urged other government appointees to emulate the example of the veteran heart surgeon and do same to support other constituencies across the country.