Good day members of the media, we have met here today to set the records straight and make our people who voted for us know what is really going on at the Sekyere East District Assembly. Exactly a week ago, that is on 23rd July, 2020 the Sekyere East assembly met to elect the Presiding Member for the Assembly but we could not. The picture painted by the DCE (Hon. Mary Boatemaa Marfo) and the erroneous impression created is that, the Assembly Members are solely the cause of the Assembly’s inability to elect the Presiding Member.

We want to set the records straight that, the DCE (Hon. Mary Boatemaa Marfo) is the one behind the whole brouhaha. We have notice that because she does not want to be exposed, she wants to make sure we do not elect a Presiding Member, thus, hiding behind a few Assembly Members to hijack the Assembly. We believe that she wants to solely run the assembly as a sole proprietorship till the end of her four year term for her own parochial interest and to cover-up the malfeasance knowing in mind that she will not continue next year should the President His Excellency Nana Addo wins the December polls.

We are stating on authority that, the problem of the District is rooted firmly in her attitude, misconduct and mismanagement of the Assembly ever since her confirmation as DCE. She has issues with almost everybody who has diverging views concerning the way she runs the Assembly, from staff of the Assembly to all stakeholders.

Her leadership in the Assembly has seen the changing of about five Co-ordinating Directors, three budget officers, three finance officers, two Assistant Co-ordinating Directors and many other Departmental heads. Her first three months saw the removal of the then Presiding Member. She later nominated her own Presiding Member and we confirmed her but later called for her removal of which the Assembly members did not support it. 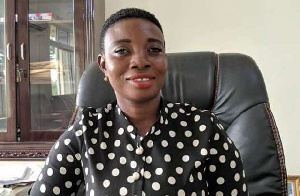 Most of our people are annoyed at the DCE’s behavior in the District which has affected the current registration exercise. Most of the places where the registration has taken place has recorded decline in their numbers compared to previous registration.

The DCE harbors the fear that the Presiding Member’s presence will obstruct her “one-man” show and her corrupt deals such as
Mismanagement of Covid-19 allocation fund
Total disrespect for Assembly decisions on certain issues bothering on the development of the district such as flouting the Assembly decision on sand and stone operation
Misuse of DACF and IGF of the Assembly including Disable Fund
Manipulating the enrollment of school feeding and caterers.

Unaccounted refuse evacuation amounting to GHS 533,000 (5.33 billion old Cedis) by the DCE without the approval of the Assembly Members hence, flouting of procurement laws
Inflating of awarded contract sum.

IN CONCLUSION, WE EXPECT THE AUTHORITIES AND FOR THAT MATTER THE RULING NPP GOVERNMENT TO ACT NOW TO SAVAGE THE GOOD IMAGE OF SEKYERE EAST DISTRICT AND FOR SANITY TO PREVAIL.