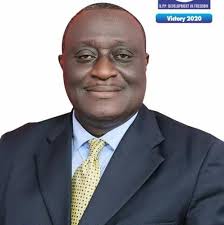 Invited Press, Ladies and Gentlemen we are gathered here to register our displeasure in the Jaman South Constituency by our incumbent MP Hon. Yaw Afful.
To start with, our MP is among the 39 MPs who never spoke in Parliament for the whole 2019. He has enjoyed three terms (12yrs) in Parliament but has never been on the floor of parliament to speak for his people. He has never been heard on any platform projecting our challenges for which reason we voted him. This has grossly hindered our development as a municipality.

Secondly, the president Nana Akuffo Addo has declared the year 2020 as a year of roads. In spite of the challenges posed by the corona virus pandemic, many constituencies are getting their roads tarred and asphalted. However, there is nothing to write home about in the Jaman South municipality with regards to these road constructions. As usual, we have been neglected to the background. As if that is not enough, the MP told us point blank that he is not responsible for constructing our roads. Ironically, as time approached for the NPP primaries, contractors were brought on our roads by this same MP who said he is not responsible for our roads. When the primaries was suspended as a result of ban on social gathering, all these contractors varnished from the roads. Most of these roads have now turned to be death traps. We therefore see this U-turn and the claim by the MP on his radio station that Drobo-Kwameseikrom road, Drobo-Zezera road, Drobo-Miremano road and the likes being under contract as a camouflage and away to deceive delegates for votes.

Thirdly, the MP and his campaign team have taken our respected Traditional rulers to the gutters and brought confusion into the municipality aside insulting the MCE day and night and his two competitors on his radio station (Jaman Radio). Chieftaincy issues is one major issue the Jaman South municipality is finding it difficult to deal with. We therefore do not want any political figure to aggravate the already existing problem.

The one million dollars per constituency is one major flagship policy of the Nana Addo government. It was established to help develop the various constituencies but ours has being the opposite. All projects under this programme have been left abandoned. Gonasua KVIP project, Kwasibuokrom KVIP, DWENEM KVIP to mention but few have all collapsed and now become death traps for residents in these towns.

Our MP conspired for the closure of Kiss fm, a local radio station at Drobo to silence his opponents. This was disclosed by Wofa Sena an executive and close ally to the MP and established his own (Jaman radio). We therefore plead through the NCA and the Ministry of communications headed by Hon. Ursula Owusu to help bring back our radio station.

Again, the MP went for Masloc loans meant for polling station executives and shared among his allies. If you are not in support of him, u will never be considered. This was kept anonymous until it was revealed and confirmed by the Regional Masloc Coordinator that the MP with his driver (Agyaa) and the Youth Organizer came for that loan meant for over 300 people in the municipality.

The MP vehemently said he has nothing to lose if he is not voted again to the parliament house for, he has bought his $1million house and paid for his car. We therefore see the actions and inactions of the MP as a way to destroy the NPP party at the Jaman South constituency before he leaves office. He has made the party look unattractive anymore to the masses. It would be very treacherous and act of betrayal for the MP to go that way. We had a very stable and formidable party before he came to lead and subsequently became the MP. The party has supported him in all the 12 years he has been in power. We plead with him not to do anything to destabilize the party before he leaves office. We know very well that Nana Addo is delivering on his campaign promises. It’s quite unfortunate that we are not experiencing the good governance in our municipality as a result of bad leadership. It’s our fear that if things persist this way, the party will lose its dominance and for the first time, go into opposition.

Finally, Jaman South is a peace loving municipality and therefore anyone who is against our peace is a threat to us. We hold our traditional rulers in a very high esteem and would not want anyone to drag them to the gutters. We urge our candidates and their supporters to refrain from insults and also do politics devoid of chieftaincy issues. We urge all our Polling station executives to listen to the cries of their people and vote accordingly come Saturday. Let us do our people good by voting for the competent person to lead us. We have been neglected for far too long. We are lagging behind. Jaman South needs you to revamp. Thank you
God bless JAMAN SOUTH Municipality,
God bless NPP,
God bless Ghana
#4more4Nana