The entire Youth Wing of Kintampo North New Patriotic Party (NPP) wish to express our heartfelt gratitude to you, Honorable Awudulai Razak, for donating a whooping amount of Thirty Thousand United States Dollars (US$ 30,000) which is equivalent to over One Hundred and Seventy Thousand Ghana Cedis (GHC 170,000) i.e. 1.7 Billion Old Cedis towards the procurement of an ultra-modern PCR machine to the Kintampo Health Research Centre (KHRC) for testing of Corona Virus cases in Kintampo North and the entire Bono East Region and its environs. 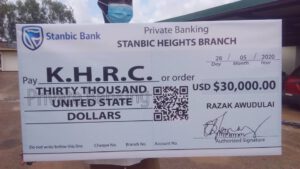 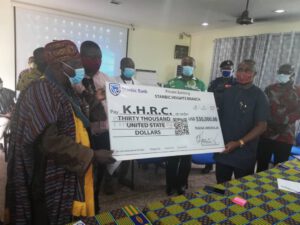 The people of Kintampo would recall that, there was an urgent call by the Ghana Medical Association (GMA) and the Media for a testing centre to be established in Kintampo, precisely at the KHRC, which has distinguished itself as one of the finest Health Research Centres in the country.

The Youth Wing and the entire people of Kintampo are not surprise about your selfless kind gesture because you exhibited a selfless leadership during your tenure as the first Municipal Chief Executive of Kintampo North (2005 – 2009) under the able leadership of His Excellency John Agyekum Kuffour, the Former President of the Republic of Ghana.

As a matter of fact, the Kintampo North Municipality had a major facelift during your reign as the Municipal Chief Executive which include the following; Kintampo town roads, Municipal Police Station, Municipal Library, NHIS Office, the Municipal Hall-College of Health, the Ghana Broadcasting Corporation (GBC) sub-station in Kintampo and many more which time would not permit us to mention. It is our fervent hope and prayer that, the people of Kintampo would one day remember and reward you accordingly.

In conclusion, it is a known fact that, the only way to identify people with the virus is through Laboratory testing and this kind gesture is going to do exactly that, i.e. help experts to identify and isolate infected persons from the entire population.

We entreat all and sundry to emulate the exemplary leadership of the Golden Boy Hon. Awudulai Razak by contributing their quota towards the development of Kintampo.

On this note, we wish to thank the M.C.E for Kintampo North, Hon. Michael Sarkodie Baffoe for the various measures he has and continue to put in place to prevent the Corona virus in the Municipality.

Finally, let us all continue to adhere to the directives announced by World Health Organization (WHO) and Ghana Health Service (GHS) i.e.
Washing of hands with soap regularly under running water for at least twenty seconds,
Practice Social distance
Wearing of nose mask,
Using of alcohol based hand sanitizer, etc.

We the NPP Youth Wing, Kintampo North are proud of you and your kind gesture. May the Almighty Allah richly bless you, bless the entire people of Kintampo and our Homeland Ghana and make our Nation Great and Strong.