Christoph Retzlaff, the German Ambassador to Ghana took to social media platform Twitter to seek the views of his followers on the decision of the Minority in Parliament of Ghana to boycott President Nana Addo Dankwa Akufo-Addo’s 4th State of the Nation Address, Thursday.

With a picture of the scene, the diplomat tweeted, “NDC opposition party leaving Parliament before President‘s State of Nation speech. What’s your opinion on that?”

The Minority which earlier announced they will be boycotting the sitting made their way out just as the national anthem ended.

Clad in black, they moved out repeating a part of the anthem that says ‘and help us to resist oppressors rule with all our will and might forever more’. Members of the majority side however sent off their colleagues with chants of ‘away’.

About a week ago, the Minority expressed frustration about the delay of their share of the Common Fund for the third quarter of 2019, stressing that it is delaying the execution of projects in their constituencies.

While threatening to boycott the State of the Nation Address, they mentioned that the delay is a deliberate attempt to deprive them of working effectively and consequently competing fairly with their opponents, especially when the general election is some months away.

At a press confab addressed by the Minority Leader Haruna Iddrisu shortly after the walkout, the side justified their actions.

Among other things, they cited the Electoral Commission’s resolve to compile a new voter’s register, the closure of pro opposition radio stations [Radio Gold, Radio XYZ], removal of Charlotte Osei from office as Electoral Commission chairperson, the failure of the president to implement the recommendations of the Emile Short Commission as the reasons for walking out of the House before the president’s speech.

“…these are not normal times. Desperate times call for desperate measures. Our tradition is credited for laying the foundations for this Fourth Republican dispensation. It is our moral duty to the Constitution we swore to protect and the people we serve in this House to rise and resist oppressor’s rule – in that enduring and rallying call of our national anthem.

“Our walkout was therefore a bold protest against tyranny and to send a very clear message directly to President Akufo-Addo that enough is enough. We shall no longer accept the growing levels of impunity and unconstitutionalism masked by duplicitous and hollow rhetoric.”

Here are a few reactions to the German Ambassador to Ghana’s tweet:

Very sad and disappointing to have an opposition party to walk away from a Big Day like this where the president gives his speech in which they could have legitimate reasons to interrogate the speech at the end.

I think its in the right direction for the Minority to walk out. The rights of the Minority must be respected and that is the true meaning of Democracy. Pay their DACF so they can develop their constituencies.#GalamSONA

They’ll be at the foyer watching it on television. I don’t understand when you’ve the chance to listen to wisdom right beside you and move outside to watch it over the television.

It’s good the opposition walked out. They cannot wast time listening to a corrupt thief. Kudos Minority, I owe u sobolo.

When are full of lies and rhetorics this kind of gesture is the ultimate way to go!!! Bogus SONA

Ghanaians are tired of his lies. A man who in opposition accused government of nepotism because the then-president had one relative in govt, wins power and has appointed over 90 direct family members into government? He has nothing for us.#GalamSONA

@NAkufoAddo‘s staffer captured on tape receiving bribe to support illegal mining but nothing done to him.Min of Sc & Env also captured confirming schemes by the NPP to engage in illegal mining to fund Akufo-Addo’s re-election campaign etc. The minority took the right decision 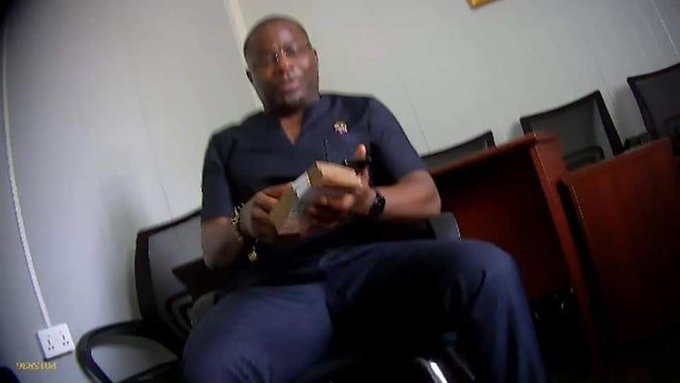 My opinion is that, both NPP and NDC are professional thieves. They steal from the country’s and none of them will go to heaven. So if you can also leave the Parliament House, leave cause Almighty Allah has already cursed them both and he’ll fire is waiting for those thieves

They should be paid by the hour maybe then they can appreciate their folly. Insensitive bunch of people taking tax payers for granted. If do same in my job I’d be sacked the following day.

Sir, we’re fed up with the cornisim & nepotism, corruption and incompetence seen in Ghana under the current regime. Ghanaians are really suffering. #GalamSONA