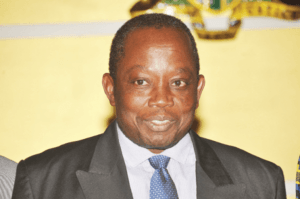 The Auditor-General, Mr Daniel Yao Domelevo, has been adjudged the Integrity Personality of the Year.
This was at the maiden Integrity Awards organised by the Ghana Integrity Initiative (GII), the local chapter of Transparency International, to recognise the contribution of anti-corruption crusaders and institutions in the fight against the menace. 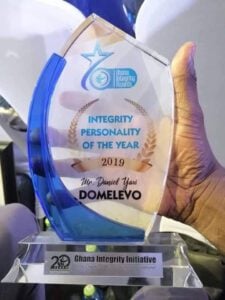 A citation accompanying Mr Domelevo’s award read: “The Auditor-General, you have taken a fearless stance to promote transparency, integrity and accountability, as well as broken the culture of impunity in the Public Service. Between 2017 and 2018, the Audit Service, under your leadership, issued 112 surcharge certificates and recovered a total of GH¢67,355,66.12 into government chest. This achievement has inspired audit institutions in other African countries to pass similar legislation on disallowance and surcharges and the GII is proud to declare that you are the Integrity Personality of the Year 2019.”

The atmosphere in the Asante Hall of the Swiss Spirit Alisa Hotel, where the event was held, was electrified when Mr Domelevo was named the man fit to bear the enviable accolade as the greatest man of integrity.

And when he stepped forward to be handed his award, there was a loud applause by the patrons of the event.

Filled with joy and beaming, Mr Domelevo simply remarked: “I am quite humbled this evening. I just want to say that I dedicate this award to my family and to the hardworking staff of the Audit Service.”

He asked staff of the service present to stand, and added: “These are my lieutenants from the Ghana Audit Service.”

State institutions such as the Driver and Vehicle Licensing Authority (DVLA), the Ministry of Finance and the Judicial Service also received awards for being transparent, accountable and innovative in their service delivery to the public.

The DVLA won the policy and administrative reforms category, while awards in the transparency and social accountability and the efficient public service delivery categories went to the Ministry of Finance and the Judicial Service, respectively.