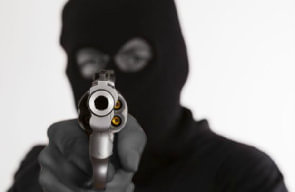 The Ejura District police command is on the heels of a highway robbery gang, suspected to be operating on the Ejura-Sekyedumase highway and believed to have shot and wounded one Kwame Bas, a driver’s mate in the head on the night of February 3.

Chief Superintendent of police Richard Kumekor, the Ejura District Commander confirmed this to the Ghana News Agency in Kumasi on Friday.

He said the victim was on board a Ssanyong Mini bus with registration number GT 266-13, loaded with bags of okro from Nkoranza, in the Brong-Ahafo Region, to Kumasi.

The vehicle driven by Adams Alhassan, on reaching the outskirts of Frante community was flagged down by a beam of light flickering in a nearby bush, but the driver ignored it and moved on.

A moment later, another armed man emerged from the bush and shot at the speeding vehicle and Bas was hit in the head by the pellets.

The driver on seeing Bas bleeding profusely from the wound, refused to stop and rushed him to Ejura government Hospital where he was admitted for treatment and was later referred to KATH.

The police acting swiftly on a tip-off, rushed to the scene, but missed the miscreants. No arrests have been made.