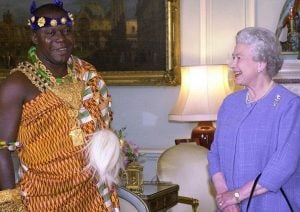 Between the 15th and 19th century, the Ashantis boasted of wealth, dominance over trade and lands, as well as, strong warriors who fought to protect their kingdom from both local and foreign threats. The Ashanti Kingdom was the most revered and powerful Kingdom in the Gold Coast (modern-day Ghana).

By the early 19th century, the British had established themselves well in the Gold Coast and had taken control over the coastal areas winning the trust of the Fantis who had become allies.

Despite having control over a great part of the Gold Coast, the British needed to defeat the Ashantis to weaken their dominance and eventually take over the entire colony. But, over time, the Ashanti Kingdom had proven a force to reckon with and ready to battle the Fantis and British at any point in time.

Ghana’s Ashanti king reunites with Akan descendants shipped to Suriname as slaves
African princesses and queens exiled for fearlessly resisting colonial oppression
For resisting colonial rule, the British exiled these African kings to Seychelles in the 1800s
Adu Bofo, the Ashanti military general of the 1800s who was most feared for his conquests and owning slaves
A long dispute had existed between the Fantis and Ashantis and the arrival of the British escalated tensions between the two Akan tribes. On several occasions, the Ashantis had expressed their displeasure with the Fantis and British by raiding the Fanti lands and fighting the people. By the 1820s, the British decided to step in and to protect the Fantis from the Ashantis. They indirectly declared war marking the beginning of the over 100 years of battle between the Britsih and the Ashantis which is today known as the Anglo-Ashanti wars. 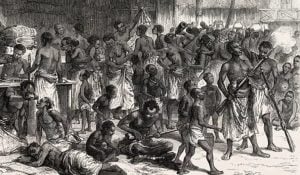 In 1823, the first war between the Ashantis and British broke after the then governor, Sir Charles McCarthy, out of frustration, declared war against the Ashantis after they had ‘unlawfully’ invaded Fanti lands which were now British protectorates and had refused to settle on an agreement with the British after several demands and discussions. This led to the first Anglo-Ashanti war known as the Battle of Nsamankow of 1824.

On January 20, 1824, keeping to his word, Sir Charles McCarthy led an army of men made up of 80 men of the Royal African Colonial Corps, 170 men of the Cape Coast Militia, and 240 Fanti tribesmen under their local chiefs to fight the Ashantis. According to several sources, Sir McCarthy’s army was very small compared to the Ashanti army of over 1000 experienced warriors. Yet, the British assumed they would win the battle due to the advantage of ammunition.

Divided into four groups with the intention of converging and launching an attack at dawn, Sir McCarthy arrived closer to River Pra with just one group and launched an attack on the Ashantis who were across the river and beating war drums. They crossed the river when McCarthy’s army run out of gun powder after hours of offensive. 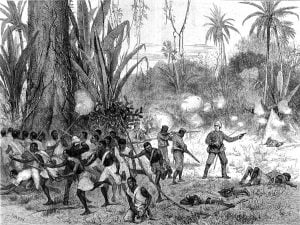 A depiction of the Fantis retreating during the Battle of Nsamankow.

The Ashanti warriors outnumbered Sir McCarthy’s army which had reduced in numbers as several of the Fantis in the army had retreated out of fear. Despite having the advantage of ammunition, the Battle of Nsamankow of 1824 was won by the Ashantis.

The battle between Sir McCarthy’s army and the Ashanti continued into January 21, 1824, and many soldiers under the British governor were killed by the Ashantis. Sensing defeat, Sir McCarthy and his men attempted to retreat but it was too late for them. It is reported that less than 20 men survived and according to sources, one survivor reported: “our gallant little force still defended themselves with their bayonets until they were completely overpowered by the myriads who instantly beheaded nearly every one of those who unfortunately fell into their remorseless hands.“

According to the Volume 9 of the African Repository, Sir McCarthy was struck down by an Ashanti warrior during the battle right after his arm got broken. The governor was weakened and struck again in the chest to his death. In an attempt to protect the governor’s body, a junior army officer, Ensign Wetherell, was also killed while the governor’s secretary, J. T. Williams, was taken hostage by the Ashantis and kept for several months.

The heads of Governor McCarthy and Ensign Wetherell were cut off and sent to the Ashanti King, Osei Tutu Kwadwo, as a sign of victory. The heads were kept as trophies of war until they were gold rimmed and used as drinking cups for Ashanti kings. According to legend, the Ashantis ate the heart of the governor as a way of honouring him. 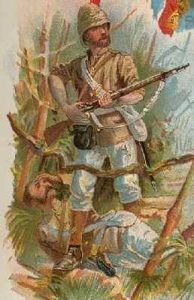 An excerpt from the Narrative of the Ashantee War, With a View of the Present State of the Colony of Sierra Leone by Major H.I Ricketts gives the account of a survivor who narrates what he saw during the killing of Sir McCarthy.

“He saw Ensign Wetherell, who appeared also to have been wounded, lying close to Sir Charles, cutting with his sword at the enemy as they were tearing the clothes off his friend and patron. Some of the Ashantis were attempting to cut off his head, and had already inflicted one gash on the back of his neck; luckily at this crisis an Ashanti of authority came up and recognizing Mr Williams from who he had received some kindness, withheld the hand of the savage. On Mr Williams’s recovering his senses, he saw the headless trunks of Sir Charles McCarthy, Mr Buckle, and Ensign Wetherell. During his captivity he was lodged under a thatched shed in the same rooms as the heads which, owing to some peculiar process, were in a perfect state of preservation.”

The killing of the Governor and captivity of Secretary Williams angered the British who sent down troops to establish an army in the Gold Coast and declare war against the Ashantis for the next 100 years until they finally became part of the Gold Coast on January 1, 1902 after defeating the Ashantis who were led by Queen Yaa Asantewaa in the War of the Golden Stool