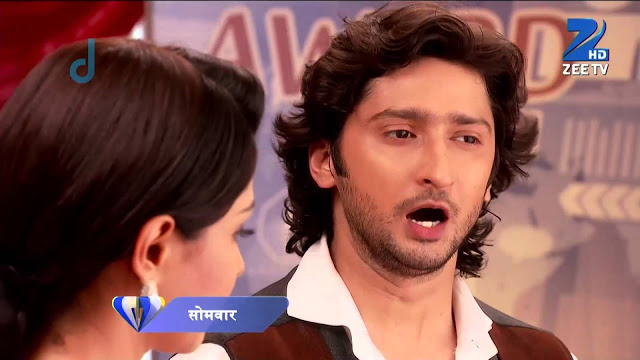 In party, Ishaani’s friends eye on Shaurya and say he’s so handsome. Ishaani asks them to stop eying him. He’s the best and he deserves someone of his standard. Ishaani’s friends ask her what’s the party for? Ishaani says first let her grand dad come. Just then Anirudh comes along with Urmi. Ishaani stares at her. Her friends ask her to tell now. Shaurya comes to Ishani and asks her to tell them now. Ishaani tells everyone that she got selected for Paris Institute. All cheer for her.
Meanwhile, Diya tries to stop printing of newspaper which will have Jhamdar hit and run case false story. But printing staff says it’s boss order to print them and they can’t listen to anyone except him. Diya calls him, but Shaurya has put his phone on side.
One of Ishaani’s friends asks Shauya how he’s feeling. Shaurya says he’s proud of Ishaani. Her friend then asks Damini. She says for her only Ishaani’s happiness matter. Whether it’s by staying with them, or in achieving her dream in Paris. Ishaani goes to her and says how she will be able to go if she says like this. Ishaani’s friend then asks Urmi. Urmi says, not her. Shaurya and Anirudh tell her to say how she’s feeling. Urmi starts that she always knew Ishaani would go in fashion world and she knew she would pass this exam. She’s very proud and happy for her. Ishaani gets angry. She claps and says so she’s an astrologer. She knows everything and she will know what will happen next as well. She steps back and tears her invitation letter. Everyone is shocked. Ishaani screams that she’s not going anywhere now. She rudely asks her friends to leave saying party is over. Urmi and all go to her, but she doesn’t let Urmi touch her.
Cheeku sees Diya and asks what she is doing there. Diya tells him Rakesh’s truth. Cheeku tells her not to start again. Shaurya is already mad and he will get more mad. Diya says she has proof. Cheeku asks what proof. She shows him recording between Rakesh and Jhamdar. Cheeku is shocked. He says so Rakesh got bribed. Diya says they need to stop printing, it’s about Awaaz reputation. She asks Cheeku to try calling Shaurya, but his phone is switched off now. Diya and Cheeku request the printing staff not to print, but they say what if Shaurya gets mad at them. Who will take responsibility? Diya says she is taking responsibility for whatever happens.
Other hand, Rakesh finds out that someone forwarded his conversation with Jhamdar. He remembers that he left his phone when going to restroom and Diya was there. He says Diya already had doubt on him and now she must be confirmed. She calls Jhamdar and tells him about it.
Later, when Diya is going home on her bike. Jhamdar’s car comes from behind and hit it. Diya’s bike slides and she falls unconscious. Jhamdar’s men take her phone and throw it away. Jhamdar then signs a truck driver to run over her. Jhamdar leaves with his men as truck approaches Diya.
Scene 1:
Location: Urmi’s residence
Urmi is apalled as ishaani continues to blame her, for her taunting past. Anirudh however, unable to believe that she has turned like this, reprimands her for behving like this with her mother. He alo reprimands damini for having instigated ishaani so badly that she cant even stand her mother for a single second, and that she must be feeling an incredible sense of achievement that she managed to distance the mother-daughter duo so apart, that the daughter hates her mother. Urmi, being docile, is highly restrained, and still apologises if she felt bad, but ishaan maintains a curt face and leave from there in a huff. Anirudh and urmi are tensed.
The next morning, when shauarya wakes up, he finds in the newspapers that the proper coverage of their high profile hit and run case hasnt been done and is boggled why.
Scene 2:
Location: Diya’s residence
While cheeku goes to check on diya, in her house, he along with diya and her family have a light banter.
Scene 3:
Location: Karan’s residence
Diya lands in karan’s house, and his mother comes to receive her. she talks about how upset karan was yesterday and hence she came over to apologise to him in person. She asks her about karan’s whereabouts, and gets o know that he isnt awake yet. Diya suggests that she shall take tea for the fiance. She complies. Diya goes and tries to get Karan’s mood cheered up. He finally looks up, and then notices the bandage on her head. He immediately gets concerned. She keeps assuring him that she is fine. He is still unconvinced. He asks her why she didnt inform him about this, and she talks about her phone loss yesterday. They both finally patch up.
Scene 4:
Location: Awaz newspaper’s office
Shaurya discusses with his team, on the media coverage regarding Jaamdaan case, when diya walks in. Diya vehemently accuses the reporter of having been bribed by jaamdaan, but sahaurya asks if she has any solid proof, regarding it. She says yes, but then remembers how she doesnt have the phone that contains the recordings. The reporter is relieved. Shaurya takes this turn to lash back at diya, saying tht he doesnt need a reporter like her, and that she needs to go immediately. She is hurt, apalled and shocked, as she turns and begins to go. The screen freezes on her face.
Precap: gaurav suggests a bizzarre idea to urmi, that they should get Rashmi’s daughter to their house, from where she is currectly residing. urmi is outraged at what he suggests. Meanwhile, Diya’s innocence is proven when cheeku makes shaurya listen to the recording, and also diya was speaking the truth about her accident the previous night. Shaurya is tensed as he hears the entire recording.
Share on:
WhatsApp