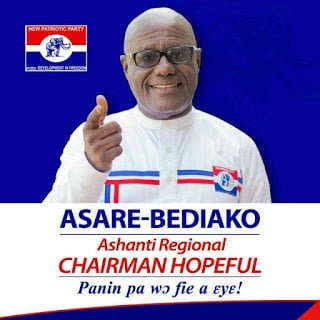 Dear media and interested parties,
We hereby endorse Mr. Robert Asare-bediako as the candidate for Ashanti Regional Chairman
of the New Patriotic Party.
We believe in his goal and aim to introduce professionalism and inclusiveness at the helm of
affairs of the party in the region, if elected to the office. We, therefore, throw our unflinching
support behind his candidature and plan for power to restore the image of the party in the
region.
In recent past, the New Patriotic Party in the region has been bedevilled with many issues and
has thus become a laughing stock on the lips of many supporters. Many party members are
disillusioned and disappointed in Wontumi’s administration because he has failed to fulfil the
promises he made to them and has even failed to secure good government positions for some
party executives in the region since the party assumed the reigns of power in 2017.
The culture of silence, intimidation and victimization he has ushered into the management of
the party has become a source of worry and concern to many people in the region. And his
disrespectful attitude to Nananom and members of the party has all but eroded the confidence
we reposed in him to turn the fortunes of the party in the region around.
Failure of his administration to preach peace and eschew violence in dispute resolution and
bring a sense of oneness at both the regional and grassroots levels are to be blamed for the
many squabbles and suspensions which have bedevilled the party since he took office.
He has never sat in the party’s office for even a day since he assumed office as the regional
chairman of the party. And we have unsuccessfully tried on several occasions to speak with him on phone with regard to some financial and material resources we have been meaning to give to
the party folks to help them in the discharge of their duties but all have proven futile.
We believe these issues are solvable but they require someone in the calibre and with the gravitas of Chairman Robert Asare-bediako to bring hope to all party members in the region, and whose consensual leadership style can help the party redeem its image, increase its votes and win all the parliamentary seats in the region at next general election.

Together, we believe we can work with Chairman Asare-bediako to make the New Patriotic Party stronger in the region.
It is for these reasons that we are rallying our members to support his candidature and ask our children and husbands who are taking part in the election to vote
for him.