Kumawood Actress, Angela Tebiri known popularly as Ella One has said she will gladly act naked if the money is good. According to her, life is all about the money so when she is approached by a movie producer and the script indicates that she has to go naked, she will gladly because of the money. “I will do it. If the money is good for me I will do it because if I’m done with the movie and I’m sitting in my car, I will not come for food from you. So I don’t care what people say. If my father is not ok with it, I won’t do it but my father but if he’s I don’t care about what others think.”
According to the actress who is known for several nude roles, criticisms about her love for nude acting does not get to her because it is an indication that she is doing very well. On whether she sleeps with Directors for role, she indicated that she will never do that because she is too hot to sleep with a director for roles.
Source: mynewsgh.com 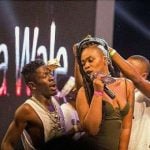