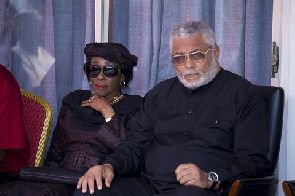 Controversial, outspoken New Patroitic Party (NPP) Member of Parliament for Assin Central, Honourable Kennedy Ohene Agyapong has taken his latest ‘anti-corruption’ exposés to the doorsteps of former President of Ghana and founder of the opposition NDC; Jerry John Rawlings and his wife Nana Konadu Agyeman Rawlings.The 5-term Assin Central MP in a tape MYNEWSGH.com has obtained, is accusing the former President and his wife of using their influence to shield one Traboulsi Marwan’s ‘dubious’ airport cargo contract from being reviewed, as the said contract is a rip-off of the republic of Ghana and has been running since July 2012 when it was signed. He also avers that Traboulsi Marwan is abusing the said contract with national security officials at the airport looking on helplessly because of the ‘powers’ behind Traboulsi.Speaking on Oman FM Thursday night, Kennedy Agyapong said Traboulsi Marwan is “throwing his weight” around the Airport and being arrogant to even national security officials who are prevented from entering and searching his Cargo yard “because he is a crony to the former President Rawlings and his wife”.Reading out some sections of the said Airport Cargo contract, he said Traboulsi Marwan was not working in the interest of Ghana and the contracts should be reviewed.“How can you have an agreement with this company on 20th July 2012 and tell us that by Regulations of the Company the draft will be provided by the Ghana Airport Company Limited. On basic terms to incorporate, [point] one, NIL-rent during initial term… and [point] two, the initial term is 20 years. No rent for 20 years! Who does that?”, he asked.“So those who gave this guy the contract, does their mind work? I don’t know whether the guy is a Pakistani, or Iranian or Lebanese, but who cares about that. They have to abrogate this contract and review it. Review it!”, he stressed.
“Traboulsi Marwan, I hear his best friend is former President Rawlings and former first lady. I don’t care about that. I care about Ghana. And this one even NDC members were so p#ssed (sic) because even in their time the way the guy was throwing his weight about. He has been in the system.”Mr Agyapong wondered why an NDC-era issue was eating into Nana Akufo-Addo’s government.“He (Traboulsi Marwan) doesn’t even allow National Security to enter his compound …. And we (NPP) are also allowing it to continue because he is Ex President Rawlings close friend”Mr Kennedy Agyapong noted that Mr Rawlings wouldn’t have allowed such a contract if it was under his government.“If it is Rawlings these things happen under him, he will kill him. Even Ghanaians he (Rawlings) killed them, they didn’t even commit the crimes this man is committing”, Mr Agyapong charged.The no-nonsense MP who has carved a repuation of say-it-as-it-is for himself said he doesn’t care about the pedigree of whoever was fronting for Traboulsi Marwan in the corridors of power.
“He (Traboulsi) is Rawlings’ crony, and so what? Rawlings My foot!”, he thundered.The MP said even NDC members have surreptitiously approached him (Kennedy) with documents on the impunity in the operations of Traboulsi Marwan and want him to deal with the issue.Mr Ken Agyapong [angrily banging a table] vowed to deal with Traboulsi Marwan, promising that there will be a revolt in Ghana over this issue because things must not remain the same as President Akufo-Addo represented change.“We will deal with him, we are not scared of anybody. You will see the revolt that will happen over this matter. Are we stupid in this country. You pamper whites and foreigners but you sabotage Ghanaians… Even NDC members are angry because the power the guy has held for a long time is too much. But under Akufo-Addo it has to change”, he said, banging a table before him.
Source: mynewsgh.com
Share on:
WhatsApp 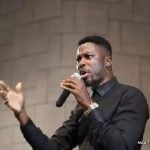 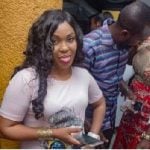