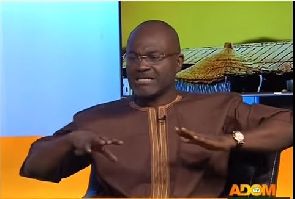 The maverick NPP Parliamentary member for Assin North in the Central Region and senior member of the ruling New Patriotic party, Hon. Kennedy Agyapong has revealed that Alhaji Bature was in a sorry state before his demise because he was abandoned by his party, the National Democratic Congress (NDC). He further revealed that it took the effort and assistance of the brother of former president John Mahama, Ibrahim Mahama to rescue him and prolong his life for a little while before he passed away. He went on to shower praises on Ibrahim Mahama for that kind gesture he offered the late Alhaji by taking care of medical needs before he passed.
Ace journalist, Managing Editor of the Al-Hajj newspaper, and The political commentator Alhaji Bature died on the 5th January 2018 at the Korle Bu Teaching Hospital.
Although the course of his death was not disclosed to the public, allegedly Alhaji suffered a stroke in his bathroom a couple of weeks before the end of 2017 and he finally gave in at the Korle Bu Teaching Hospital on the 5 January 2018.
Share on:
WhatsApp