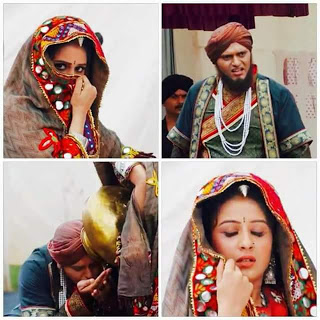 Scene 1Doctor applies Jodha’s cream to Jalal, Nisar comes to Jalal and ask about his health? Jalal says i am feeling good now, i will become fine soon and will go on hunting, Nisar says dont say like this, hunting is not important, we are praying for you, Nisar thinks that you wont be able to go on hunting as till then my poison will hunt you down, Nisar says i have come to invite you, some people requested us to let them stay here and they will dance in our function, you will feel good in function but if your health is not fine then i will say no to them, Jalal says i also wanna leave this bed, maybe i will good there, Nisar thanks him and says i hope you will not forget this function, he leaves, Jalal thinks i had to come in function to know who from my clan is ready to betray me on your instigation.the fake statement is created as ordered by ruks, dasi comes to Salima’s room with food, she puts fake statement there and leaves, Salima starts checking statements and says to financier Mirsa that i forgot about turkey’s export, take this statement and give to Todar, Salima says tell him that order should be ready on time.