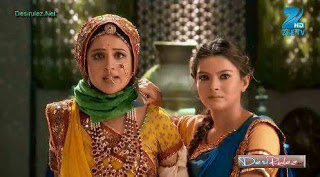 SCene 1jalal is standing near justice weighing machine, hamida
comes there and says I know you are worried, you comehere when you find it difficult to take decision, I hopethis machine will tell you right thing, jalal says I havehope too but I don’t know whats happening, shehnazsays todar raped her and todar says she is lying and shepretends to be mad and jodha is with shehnaz and shenever stands with wrong but I cant believe todar can dothis cheap thing, hamida says I don’t believe it either butall proofs are against him, many people have seen himdoing wrong, jalal says even jodha has seen him,hamdia says only one person can answer you on thismatter that is king jalal, king jalal has took all thedecisions wisely be it matter of adham, bakshi ormaham, your king inside will answer on this matter toojust ask him, she leaves.all wives in harem are sitting, one says I have pitty onshehnaz, other says one minister tried to rape a womeso jodha is with her, ruks says enough, todar is verysensible and loyal he cant do that, salima says we cantsay anything but why will shehnaz lie, hamida says jalalis tensed, todar is close to him and shehnaz is close tojodha but if this happened with shehnaz then its verywrong, she is innocent.Scene 2its morning, all are in court, jalal says that you alllistened yesterday the matter and the proofs so I wantyour suggestions, one priest says that what was toldyesterday, its shows that todar hates shehnaz, he triedto rape her and now alleging her, he doesn’t have proofsbut jodha has proofs against him, I feel todar is culprit,in these matters the punishment is death but king willdecide it, jalal says now ready for the decision, as todarcouldn’t proof himself innocent so I am announcing thathe will be hanged to death, all are stunned, todar is sad,jalal says it is biggest sin to rape a girl so I order to killhim, jalal ask atgah to ask him his last wish, jalal looksat jodha and leaves. soldiers takes away todar, shehnazsmirks and flashback shows how todar asked her to tellhim truth that you are not mad, I will show your realface to jalal, I will tell him about you and I believe thatyou put poison in jalal’s turban, he leaves, shehnazthinks what if he tells about me before that I have to dosomething.Scene 3shehnaz is with maham, maham says I am impressedhow you acted, shehnaz says I am away from mymission, maham says you will get throne, you will getyour mother soon but I feel like that you should leave thepalace and go to some safe place, shehnaz says no I amjust waiting for my force to come here, mahaC will comehere then we will have face off with jalal.mahaC is with pigeons, beg says what you are doinghere, you should be with your husband, mahaC says thisnikaah is just a network of my plans and why will Iwaste time with that boy, what I wanted from him, Ihave got it, beg says you are clever, congrats you havegot the force to fight against jalal, I have brought a giftfor you, she doesn’t take it, he says I am also waiting foryour victory but just look at this gift, she yakes the gift, itis stamp =, he says you will use this stamp when youwill be queen of agra, she says very well, this ismotivation, when I will see this stamp, I will be pushedto attack jalal, he says haiders’s force is now yours,mahaC says my force will start their journey towardsagra to attack him, this force is storm which will destroyMughal saltant.Scene 4moti says to jodha that thank GOd shehnaz got justicebut I noticed that when jalal gave todar punishment hiswife was standing silent like it didn’t had any effect onher, jodha says right, one lady(todar’s wife) comes andsays todar is innocent, he didn’t do anything wrong, Icame to see how you are feeling after doing injustice,jodha says I know you are hurt but I did what womenshould do, your husband try to rape shehnaz and I waswitness, lady says I am not here to ask pardon, I justwant to say that I know my husband, if god says thattodar is culprit then I would not accept it, you are cleverbut you got fooled by shehnaz,Scenetodar is in jail, going to his prison, zakira sees him andask what happened, todar says I am not angry that I amnow prisoner but I am worried that jalal is in danger,shehnaz framed me and now I am here, he leaves.heavy storm is coming in agra, moti asys to jodha that itseems like some devil did something, jalal thinks that Ifeel like god is angry on me for what I did, jodha comesto mandir and tries to save diya but flame of diya goesoff, jodha says what, it means some bad happened, moticomes there, jodha says something very has happened,we did something, moti tries to lit diya flame again butcant because of strong winds, moti says don’t worryjodha, storm is heavy so how diay will keep burningflame, jodha is tensed.jalal thinks that this storm wants to destroy all, thisstorm will go and will leave question, I did wrong withtodar, he is innocent but if I didn’t do it then peoplewould have thought me wrong, jodha comes there, jalaland jodha comes face to face, jalal being sad is lookingdown, jodha says its strong storm, you shouldn’t come